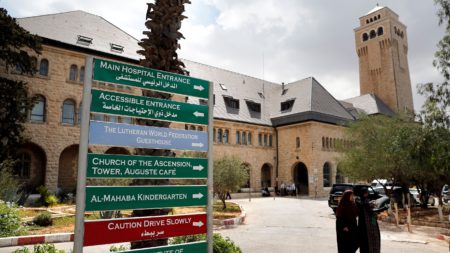 Augusta Victoria Hospital (AVH), in occupied Jerusalem, Sunday evening, launched a distress call entitled “The Future of AVH Hospital is in Danger,” which has reached a dead end, according to administration.

The hospital said, in a statement, that the Palestinian government did not transfer any funds to the hospital and refuses to pay its debts, which have now reached NIS 200 million. Palestinian Prime Minister Mohammed Ishtayah said, Sunday afternoon, that the Ministry of Finance transferred NIS 20 million.

The director general of the hospital, Walid Namour, said that there were no medicines, and that the hospital is incapable of providing treatment services, calling for immediate funds to buy medicine.

Namour added that the NIS 20 million in question had not reached the hospital, and, even if it did, only constitutes only 10% of the debt.

Dozens of patients, especially cancer patients, some of them from Gaza, complained of the hospital’s refusal to treat them because of the debt crisis, and the lack of cancer drugs in the hospital.

He noted, according to Al Ray Palestinian Media Agency, that the pharmaceutical companies specializing in cancer treatment, and a number of other serious diseases, have stopped dealing with the hospital.