Banksy’s Walled Off Hotel Receives 50,000 Visitors on its First Anniversary 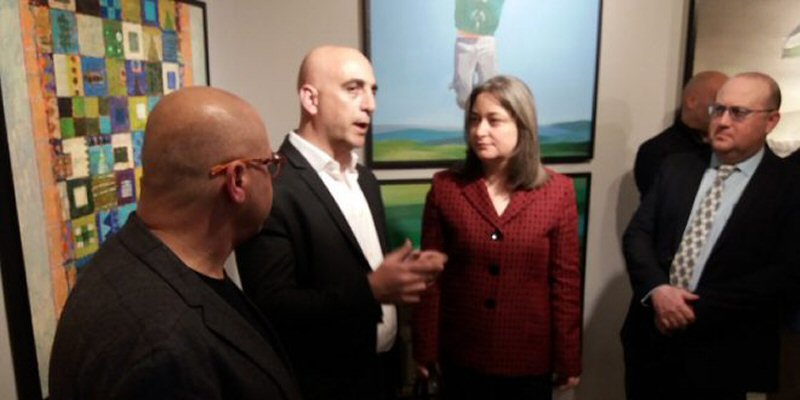 The Walled Off Hotel, located next to the Israeli apartheid wall with the “worst view in the world”  has just celebrated its first anniversary with over 50,000 visitors.

The hotel, designed by the British graffiti artist Banksy, contains visual artworks about the occupation and apartheid, and has brought international attention since it overlooks an Israeli military tower and checkpoint south of Bethlehem.

According to the PNN, the celebration included a second collective exhibition of the works of 20 senior Palestinian artists in the homeland and abroad, under the title “Beit Byout,” and was sponsored by the Palestinian Ministry of Tourism and Antiquities, headed by minister Rula Maay’a.

The first collective exhibition lasted for one year, where most of the exhibited paintings were sold. In addition, there is an individual exhibition that is changed every two months to give artists the opportunity to participate and show their art to the world

The ceremony was attended foreign consuls, foreign and local officials, and international visitors.

At the beginning of the ceremony, Hotel Manager, Wissam Salsa’ welcomed the guests, noting that Bethlehem has become a destinations for internationals, with the hotel being one of the leading places to visit in the city, since it  reflects the reality in Palestine and raises awareness of the Palestinian cause on an international level.

Salsa pointed out that there is a philosophy of the hotel based on the idea of the easing the suffering through art, and reflecting  the injustices towards the Palestinian people.

For her part, Minister of Tourism and Antiquities Rula Maay’a said that what makes the hotel special is that it hosts international politicians, parliamentarians, ambassadors and religious men alike, which has made it successful and a factor in shaping awareness of the Palestinian cause.

Maay’a also thanked all of the artists who took part in the exhibition, pointing out that they also play a major role in drawing attention to the occupation and Palestinian cause.