Can Trump Find the Elusive Land of ‘Peacerael’? 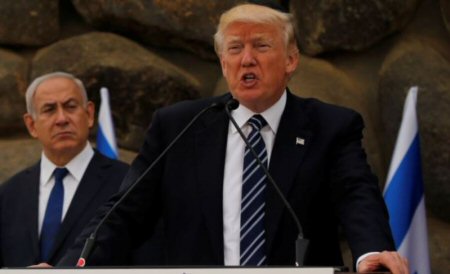 nsnbc : U.S. President Donald Trump, on Tuesday, said both Israeli and Palestinian leaders were ready for peace. The statement was made alongside Israeli Prime Minister benjamin Netanyahu in a speech at the Israel Museum. Trump both met Netanyahu and Palestinian Authority President Mahmoud Abbas.

Trump had held talks with Israeli Prime Minister benjamin Netanyahu on Monday and met him again on Tuesday after a visit to the West Bank for a one-hour meeting with Palestinian Authority President Mahmoud Abbas.

Speaking at the Israel Museum Trump said “We know that peace is possible if we put aside the pain and disagreements of the past and commit together to finally resolving this crisis which has dragged on for nearly half a century”. He added that Israelis and Palestinians “can make a deal”.

There was no specific mention in any of Trump’s remarks in Israel to “occupation” or the “two-state solution” – a pair of major sticking points for the Palestinians. “Head spinning: Never has a U.S. president expressed so much confidence in a conflict-ending peace agreement with so little prospect of success,” tweeted Aaron David Miller who was a U.S. negotiator on the Middle East in both Republican and Democratic administrations.

Speaking alongside Trump in Bethlehem earlier on Tuesday, Palestinian Authority President Mahmoud Abbas said the fundamental problem for the Palestinians is with the Israeli occupation and settlements and Israel’s failure to recognize Palestine. “The problem is not Judaism but occupation,” added Abbas.

Abbas, who has seen his political support from his constituents as well as support for the Oslo Accords weaken, reiterated a willingness to accept the two-state solution and the 1967 borders. That said, Abbas and several other Palestinian leaders have over the last two years repeatedly stressed that failure to implement the provisions of the Oslo Accords would leave them no other option than to push for a one-state solution.

Trump, in Bethlehem, vowed to do “everything I can” to bring peace to the Middle East, echoing sentiments of several of his predecessors who tried and failed to achieve the same goal.

In public remarks on Monday, Netanyahu warned that “it will not be simple,” but also expressed cautious optimism that “for the first time in many years and the first time in my lifetime, I see a real hope for change.” At the prime minister’s residence Monday evening, Trump praised Netanyahu, elected to his fourth term in 2015, for “working very hard at it. It’s not easy…America stands ready to assist in every way we can,” noting, “There’s a lot of love out there.”

There was no official criticism of Israel’s occupation and other violations of international law and numerous UN resolutions. Trump has handed son-in-law Jared Kushner as well as longtime business lawyer Jason Greenblatt the assignment of charting the course toward a peace process.

What may be surprising and make Trumps visit appear less lopsided – some would say surprising, is that he went to the wall alone, without Israeli leaders. In planning for Trump’s visit to Israel, the U.S. delegation rejected a request that Israeli Prime Minister Benjamin Netanyahu accompany him to the Western Wall, telling the Israelis it is “not your territory. It’s part of the West Bank,” part of lands that Israel annexed in the Six-Day War in 1967.

Trump was also the first U.S. president to openly question the feasibility of the implementation of the Oslo Accords and by extension possibly of a two-state solution. Many, Israelis and Palestinians alike, believe that a two-state solution is never really was and certainly no longer is possible. A one-state-solution, one that would aim at finding that elusive land of Peacerael, however, would demand political sea changes from Israelis and Palestinians alike.

Arab Israelis and Palestinians fear a one-state-solution would establish one state with two classes of citizens. Many non-Arab Israelis fear the so-called demographic bomb, and that they would soon be outnumbered by those “reproducing Palestinians”.

And then, of course, there are the question about Israel’s demand to be recognized as “a Jewish state” and decades of spilled blood and hatred, fueled by propaganda, questions about “the right of return” of displaced Palestinians, and Israel’s policy aimed to change the demographics by importing Jews from around the world that make this land of Peacerael very elusive indeed. The “real tough cookies” were probably not even discussed during Trump’s largely ceremonial two-day visit.

But the elusive Peaceral set aside, the future of Jerusalem within the context of a two-state solution is one of the major unresolved issues. Israel considers Jerusalem as its capital, although the international community does not recognize it as such and foreign embassies are located in Tel Aviv. The Palestinians, if an independent Palestinian state is created, want to claim east Jerusalem as their capital.