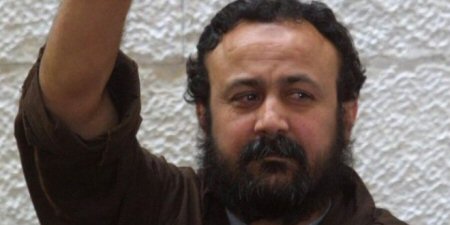 Hours before the arrival of US President Donald Trump to Bethlehem, for a meeting with PA President Mahmoud Abbas, the families of some 1,500 hunger-striking Palestinian detainees sent a letter to Trump telling him that Palestinian prisoners are freedom fighters, according to international law, and they do not want them to die inside Israeli prisons.

The prisoners have been on  hunger strike for 37 days, beginning on prisoner’s day, 17 April, PNN reports. The strike is led by PLO leader, Marwan Barghouthi.

According the letter, the families said : ”In this part of the Holy Land, 37 days ago, 1,500 Palestinian prisoners in Israeli jails launched a hunger strike. They preferred hunger instead  lack of dignity, and chose the empty intestines war instead of depriving them of their basic rights.”

(The actual number of detainees now on hunger strike is much larger, and is increasing regularly.)

The letter added the demand to improve conditions of detainees’ lives, their right to see their children,  contact with their families, adequate health care, and an end to the policy of administrative detention, without charge or trial.

“We, the families of the prisoners, demand that our children do not face death behind  the bars of Israeli prisons.

Hundreds of our children, fathers and husbands are fighting death in what Israel calls field hospitals, in fact its cells, where detention continues without any respect for the health, human dignity and lives.”

The letter said that the detainees are not murderers or terrorists, as  occupation authorities claim, but that they are fighting for freedom, dignity and the realization of the human rights which belong to them and their people under all international laws and conventions.

The letters also added : ”As Palestinians, we have a lot to contribute and to offer to the world.

We have presented models of resistance, freedom and independence and that our prisoners demand to be treated with respect, and with the same dignity that is dealt with detainees around the world and in accordance with the standards set out in international humanitarian law, which the United States of America  has contributed to its formulation and always demands to implement it .”

The  families also said, in the letter to Trump: ”We believe that you have the ability to enough influence on the Israeli government  to end the suffering of our captive children in Israeli jails. In this spirit, we call upon you as President of the United States and its Government to take care of the issue of our prisoners and to intervene urgently to save them from the danger of death and to ensure that they meet their just humanitarian demands.”

In conclusion, the families stated: ”As the prisoner Marwan Barghouti, who leads this hunger strike, said, the last day of the occupation is the first day of peace.”