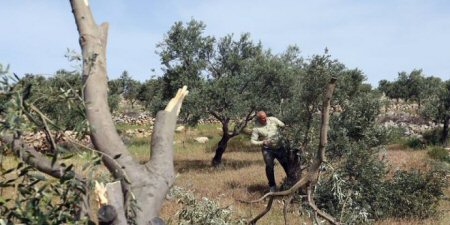 Ghassan Daghlas, an official who monitors settlement activity in the northern West Bank, said that Israeli settlers from the illegal Rahhalim settlement uprooted dozens of olive trees belonging to Palestinians from the Nablus-area village of Yasuf.

Daghlas added that the trees and the land belong to Muhammad Saleh Hijazi, according to Ma’an.

The majority of settler thefts committed against Palestinians are met with impunity, with Israelis rarely facing consequences for such thefts.

Only 1.9 percent of complaints submitted by Palestinians against Israeli settler attacks or theft result in a conviction, while 95.6 percent of investigations of damage to olive trees are closed due to failures of Israeli police, according to the Israeli human rights group Yesh Din.

Yesh Din, along with Israeli rights group B’Tselem, have previously condemned Israeli authorities for failing to protect Palestinians from settlers violence or investigate attacks, particularly during olive harvest season, when incidents of attacks on harvesters and their olive groves have been a near daily occurrence in past years.