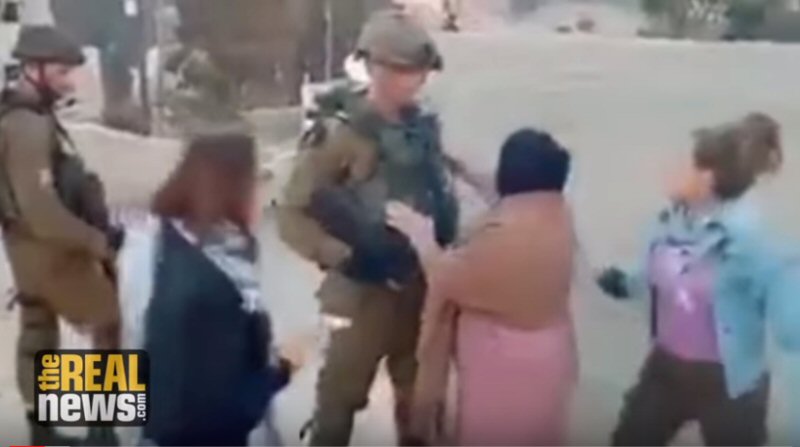 Musab Tamimi, the 17-year old cousin of jailed Palestinian teen Ahed Tamimi, has been shot dead by Israeli forces at a protest in the occupied West Bank. Musab, who was unarmed, is the latest Palestinian youth to die at the hands of Israelis after 35 were killed in 2016. Hundreds like Ahed are also tried by Israeli military courts each year.

AARON MATÉ: It’s The Real News. I’m Aaron Maté. Israeli forces have shot dead 17-year-old Musab Tamimi at a protest in the occupied West Bank. Musab was unarmed. He was the cousin of 16-year-old Ahed Tamimi. Ahed was arrested for slapping a soldier after she herself was assaulted and another cousin, Muhammad Fadel Tamimi, was shot in the face and left in a coma. Ahed remains in an Israeli military prison and charged with multiple counts of assault. The violence against the Tamimi family has brought international attention to the plight of Palestinian youths in the occupied territories. Israel is the only country in the world that systematically prosecutes hundreds of children each year in military courts without fundamental rights, and Musab Tamimi is only the latest Palestinian youth to be killed under occupation.Last year was the deadliest for Palestinian children in a decade, with 35 killed by Israeli forces and armed civilians. Will violence like today’s against the Tamimi family finally spark international action? Earlier, I spoke to Brad Parker, International Advocacy Officer and Attorney for Defense for Children International Palestine. Welcome, Brad. As we process this news now of yet another member of the Tamimi family attacked by Israeli forces, leading to a fatality, your thoughts on the overall situation for Palestinian youths in the occupied territories.

BRAD PARKER: Sure. Thanks for having me. I think the real thing that strikes me is that, while the attention and the awareness around the violence against Palestinian children is heightened at the moment, really these violations are widespread, systematic, that are really occurring on a daily basis. The arrest of Ahed is a perfect example of how Palestinian youth are targeted for arrest by Israeli forces in Palestinian communities located near settlements, communities that are having weekly protests against the occupation, communities where the separation barrier takes their land. This is what we see as a local Palestinian child rights organization that defends children in the Israeli military court. These are where children are targeted, and along with arrest and detention, obviously violence, whether it’s live ammunition, rubber-coated metal bullets, tear gas, etc., these are the weapons that these children encounter. As the Trump administration announced the plans for moving the embassy to Jerusalem, it obviously escalated, tensions escalated, and when that happens we see increased presence and deployment of Israeli forces, increased clashes with Palestinian protestors, and children really bear the brunt of the violence and the detentions that they create.

AARON MATÉ: The story of Ahed Tamimi has gotten a lot of attention. After Israeli forces shot her cousin in the face, leaving him in a coma, she then slapped an Israeli soldier who had trespassed on her family’s property. Her family for years, the Tamimi family, has been involved in leading weekly non-violent protests against Israeli occupation and settlers. But can you tell, maybe, some stories that illustrate what it’s like for Palestinian children who go out to protest the occupation and what they face from the soldiers?

BRAD PARKER: Sure. First off, we’ve seen since the beginning of 2014 Israeli forces increasingly using live ammunition to quell protests, so the live ammunition goes along with the other “non-lethal” crowd control weapons, which when misused or deployed improperly have been lethal. So over the past several months, we’ve seen the increasing use of sponge bullets in East Jerusalem, rubber-coated metal bullets throughout the West Bank, all putting children … increasing their vulnerability to injury and severe injury. We’ve documented a number of cases this year where children have lost their eyes because of sponge bullets being fired at the upper body, where Israeli military guidelines, police guidelines dictate that those sponge bullets should only be directed at the lower extremities and not at children.When children are actually participating in demonstrations, those are the types of things that they can be subject to by the Israeli forces, but it’s also, I think, in a number of cases that we document, you see children that aren’t involved in clashes, that are sort of on the periphery or just happen to be in the wrong spot at the wrong time, where they encounter Israeli forces, they’re arrested, detained, beaten, blindfolded, their hands are tied, put in a military jeep and taken off to an interrogation center. In some ways, violations against children are so widespread, systematic, institutionalized by Israeli forces that really guilt or innocence is almost irrelevant.

AARON MATÉ: On that front, let’s talk about the military court system that children are placed into. By the count of your group, it’s up in between 500 to 700 children, including someone like Ahed Tamimi, are put through Israeli military courts each year. What do they face there?

BRAD PARKER: The entire military law system is set up to deny rights. For example, children under the Israeli military law don’t have the right to an attorney during interrogations. That’s sort of the primary example of fair trial protections that just don’t exist. Aside from that, of these estimated 500 to 700 Palestinian children that are arrested by Israeli forces each year and prosecuted in the military courts, around 75% of them experience some form of physical violence during arrest, detention, transfer. So you have a context where the law is set up to deny rights. Children can be arrested without warrants, so soldiers have the ability to arrest under military law on suspicion.The majority of children are charged with throwing stones, which is a specific offense under the Israeli military law, so what happens is children are accused of throwing stones, arrested, denied access to attorneys, not allowed to have a present parent during interrogation. There’s no independent oversight over arrests in the form of warrants, so you have a situation where children are essentially in an interrogation room where the main motivation behind that interrogation is to produce some type of incriminating statement or confession that could be passed to a military prosecutor, to then prosecute the child in the courts. So that’s sort of the typical process, and then once a child is detained, pre-trial detention is the norm.In the case of Ahed, she was arrested, detained, appeared in military court, her detention was extended for a period of several days, even though no charges had been placed against her. And that’s sort of the typical process, is that children, by default, as the norm, are subject to pre-trial detention, both pre-charge and post-charge.

AARON MATÉ: Finally, Brad, there is some momentum, a little bit on Capitol Hill, for the U.S. to counter, or make gestures toward countering, the Israeli detention of Palestinian children. Can you talk about the bill that was recently introduced?

BRAD PARKER: Sure. Over the past few years, we’ve been working as Defense for International Children – Palestine to mobilize people internationally to engage their policy makers on the issue of children in military detention. Through that work, we’ve supported and worked with a number of different offices, Congressional offices in Washington, D.C., to produce a bill and support a bill that calls on the Secretary of State to certify annually that no U.S. military assistance to the government of Israel is used to support the ill-treatment, torture of Palestinian children in the military detention system. It was introduced in November 2014. The bill is H.R. 4391. It was introduced with 10 co-sponsors, led by Representative Betty McCollum from Minnesota, and by the end of December, that number had doubled up to 20 co-sponsors.So I think for folks working in the U.S. and internationally on justice and accountability for Palestinian rights violations, it sends a clear message to the Israeli authorities that the U.S. Congress is watching and that there is growing momentum to view the Israel-Palestinian context not through a sole political lens, but through a rights-based lens where it’s less about one state, two state, whatever the political solution is, and more about ensuring that there’s justice and accountability, equality and freedom for Palestinians living under half a century of military occupation.

AARON MATÉ: Right, and just to say for the Tamimi family, so we have Ahed, her mother and her cousin. They’ve been imprisoned. The Tamimi family has lost three members to Israeli soldiers: Rashti, Mustafa, and today, Musab. Musab’s funeral will be on Thursday, and we’ll be sure to keep covering the plight of the Tamimi family here on The Real News.Brad Parker, International Advocacy Officer and Attorney for Defense for Children International Palestine, thank you.