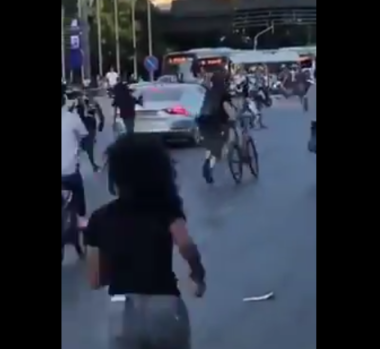 The off-duty officer was arrested and questioned on Sunday and released to house arrest, was questioned a second time on Tuesday, and statements taken from witnesses, according to the Justice Ministry. It also claimed there had been reconstructions of the incident, and that additional evidence had been found.

Police claim the deceased, Solomon Teka, 18, was shot as the off-duty officer tried to separate two youths engaged in a conflict in the Haifa suburb of Kiryat Haim, but one eyewitness claims the officer was the instigator of the conflict.

The pathologist’s report was inconclusive at the time of this report, stating the teen was hit in the chest, but the trajectory of the bullet has not yet been established.

In the early aftermath, the police said it would allow freedom of expression according to the law, however, would act with determination against any kind of violence, including attempts to attack a police officer or civilians.

The police used crowd dispersal measures against the rioters, including tear-gas, and stun grenades, a scene familiar to Palestinians resisting occupation, but less so for Israel.

In the northern Israeli city, Afula, 200 demonstrators blocked traffic, and burned tires, on one of the main streets, while major roads in a number of other cities, including Tel Aviv and Haifa. In Tel Aviv, protestors turned over, and set fire to a vehicle, a scene said to be on several highways across Israel

Arrests were made in Jerusalem, Ashdod, with a total of 60 people arrested on Tuesday, at all sites, 50 Israeli police were reported to be injured during clashes.

A relative of the slain teen, Itay Ashatu, said that when the boy emigrated to Israel from Ethiopia, he was a good boy, but said “There are kids who are a product of the difficult reality they’re in,” adding “It’s hard to be black in Israel and walk around feeling secure,” and “Even a policeman of Ethiopian origin, once he takes off his uniform, is at risk of taking a bullet in the head. Parents aren’t afraid of road accidents or terrorists, they are afraid of policemen. There’s no faith in any system, there’s no justice.”

#Watch| Violence has broken out on Tuesday in #TelAviv following Israeli police murder of an Ethiopian settler. pic.twitter.com/wnNAlIXVLt

#Watch| Violence has broken out on Tuesday in #TelAviv following Israeli police murder of an Ethiopian settlers. pic.twitter.com/wnNAlIXVLt

#Watch| Violence has broken out on Tuesday in #TelAviv following Israeli police murder of an Ethiopian settlers. pic.twitter.com/wnNAlIXVLt