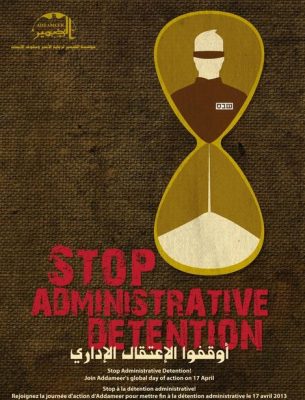 The head of the Studies and Documentation Department at the Palestinian Detainees’ Committee, former political prisoner, Abdul-Nasser Ferwana, stated that Israel has issued around 3086 arbitrary Administrative detention orders, since October 1, 2015, holding hundreds of detainees captive without charges or trial.

Ferwana stated that 1285 (%42) of these orders were issued against detainees for the first time, and 1801 (%58) were renewals of existing orders.

He added that Israel is currently holding captive 450 Palestinians, including women, children and legislators, under Administrative Detention orders.

Administrative Detention policies aim at imprisoning hundreds of persons for extended periods; these orders are largely repeatedly renewed without charges or trial.

Many of these orders are renewed each time to three, four, or six months, in many cases, imprisoning dozens of detainees for years.

“Israel has transformed Administrative Detention from something that is occasionally used to a fixed policy in dealing with thousands of detainees since 1967. This includes males and females, including children.” Ferwana stated, “This illegal policy became a tool used by Israel to exact vengeance on detainees who are not facing any charges. It is immoral, and violates basic standards of human rights.”

Ferwana called on various local, regional and international legal and human rights groups to intervene, and end the escalating Israeli violations of International Law and the Four Geneva Convention, and added that Israel’s use and abuse of Administrative Detention was never occasional, but a fixed illegal policy, part of ongoing violations and oppression.”

He also stated that the silence of International Community, the unwillingness and idleness in dealing with these violations, have given Israel a green light to continue and escalate these violations, and pushed many detainees to hold individual and extended hunger strikes, demanding dignity and justice.