Gaza: Meet the Palestinian Doctor Who Watched His Son Die 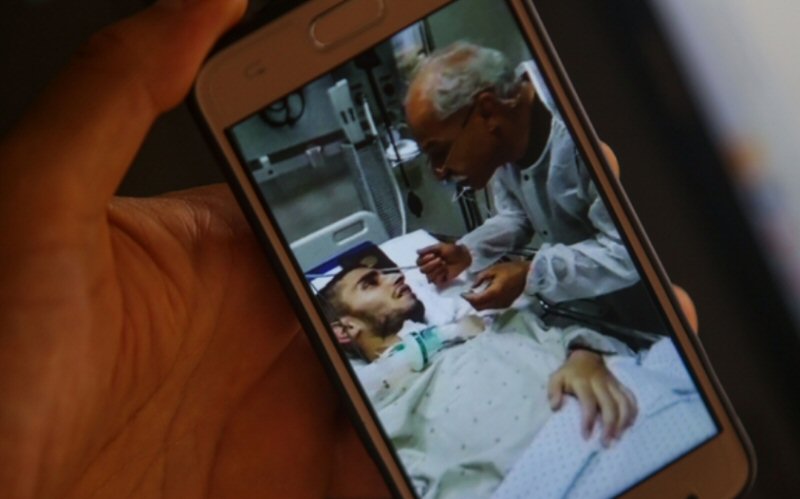 In the 22 years of Sari al-Shobaki’s life, his father rescued him from death seven times, but the eighth time, when he was shot by the Israeli occupied snipers, he failed.

The first time, Dr Dahoud al-Shobaki recalls, was when his son was born three months premature and turned blue from lack of oxygen in an incubator. Then there was also the time when he had a dangerously high fever at age four.

But, the last five occurred in the span of two months this year.

“I wish that I had been able to save my son’s life like I am used to … but the eighth time, it was God’s decree,” Dahoud tells Middle East Eye.

As a retired doctor now turned public health consultant in the Gaza Strip, Dahoud, 56, knows the difficulties faced by wounded and sick patients in the besieged Palestinian enclave’s hospitals.

But despite the health scares he has faced over the years, nothing prepared Dahoud to witness first-hand the slow death of his son Sari, shot in the neck by Israeli soldiers in May, only to succumb to his wounds two months later.

At only 22, Sari al-Shobaki dreamt of getting married and becoming a father. An enterprising young man, he worked hard to make his dream come true, working a series of odd jobs such as selling cold drinks and stockings or working at a photography studio.

The second-eldest of eight children, Sari used his earnings to help out his family in the Daraj neighbourhood of Gaza City and to try to build a future for himself.

At 10am on 14 May, the young man walked out of the house without telling his family where he was going. What exactly transpired then remains a mystery to his family until now.

On the other end of the line, someone told him that his beloved son had been killed by Israeli soldiers in Gaza’s buffer zone near Israel.

That fateful Monday ended up being the single bloodiest day of the Great March of Return. Since 30 March, thousands of Palestinians have protested against living conditions in Gaza and called for the right of return for those Palestinian refugees whose families were displaced during the establishment of Israel.

At least 58 died on 14 May after Israeli forces opened fire, with a further seven Palestinians later dying from injuries sustained that day. Many had come out to denounce the inauguration of the US embassy in Jerusalem, which happened on the same day.

Dahoud rushed to the al-Shifa hospital in Gaza City, which was overwhelmed that day with casualties from the protest. The medical authorities did not have anyone registered under Sari’s name, so Dahoud combed every department of the medical centre for hours.

Amid the chaos, he finally found his son lying in a corner of the reception area. On his chest lay a piece of paper marked “Unidentified”. He was in dire straits, but still breathing.

Dahoud could barely control his emotions when he saw that no one was providing his son with medical care.

“Oh Sari, how many hours you have been bleeding alone? Is this what you deserve?” he remembers asking.

Dahoud immediately took matters into his own hands and saved his son’s life for a third time, transfusing 12 units of blood and infusing more than 100 saline solution units.

Sari stabilised, but the bullet that penetrated his neck had hit his spinal cord, rendering him quadriplegic and leaving him with respiratory and intestinal paralysis.

After 10 days at the al-Shifa hospital, all the doctors who examined Sari agreed that his condition was irreversible, especially given the limited medical care available in Gaza, where extensive power cuts and a shortage of medical supplies due to the 11-year Israeli siege have devastated its health sector.

Dahoud, like many desperate relatives in Gaza, tried hard to find care for his son outside the enclave, a difficult process given the small number of medical exit permits granted by Israel to Palestinian patients.

Finally, on 25 May, Dahoud and Sari were allowed to travel to East Jerusalem for treatment at the Saint Joseph hospital.

Despite the diagnosis and the lack of proper medical care in Gaza, Dahoud did not lose hope.

Father and son began communicating through eye contact: Sari would blink to say “yes” and raise his eyebrows to signify “no”.

“I will be happy even with only your eyes with me, even without your body,” Dahoud recalls saying. “I do not ask for more.”

Soon, the two devised a more elaborate system of communication. Dahoud would recite the alphabet, and Sari would blink when he reached the desired letter, slowly spelling out his sentences.

Dahoud would warmly encourage his son through rehabilitation exercises. Some sessions were filmed and posted online, prompting waves of support on social media.

“One more time, love of my life, do you want to get out of here?” he would say, kissing Sari’s forehead as the young man would blink once for “yes”.

Between 5 June and 5 July, Sari made a slow but promising recovery in the East Jerusalem hospital, Dahoud says, as he kept up his involvement in his son’s treatment.

“I was checking on everything, even on his breath. I would massage him for three hours or more every day until I noticed that he was trying to move his neck,” Dahoud says.

“He regained his sense of smell, and was able to defecate and speak again,” Dahoud says. “He also moved the muscles of his stomach and thigh, and moved his knee when I pulled it.”

Dahoud could not believe the great improvements made by his son.

He remembers kissing Sari and telling him: “We will not go back to Gaza until you can stand on your feet.”

Sari had replied: “I want to stand up. I want to walk, dad.”

But just as his condition looked hopeful, Sari’s health took a drastic turn for the worse.

A tracheostomy operation to insert a tube into Sari’s neck to help him breathe did not go as planned, causing a tracheoesophagal fistula – an abnormal connection between his oesophagus and windpipe – and a drug-resistant bacterial infection.

The fistula made it impossible for Sari to eat. Dahoud watched helplessly as his son withered away, knowing that he was hungry and thirsty yet unable to satisfy these basic needs.

On 17 July, slightly more than two months after he was shot, Sari al-Shobaki died.

“When Sari passed away, he hadn’t seen a single tear from my eye,” Dahoud says. “When I was with him, I held myself together completely. And I was strong, very strong. And I’m really happy about this, that Sari never saw me cry.

“Sari’s spirits were as high as the sky, while my spirits were as low as the ground. I would leave him in the intensive care unit and go the waiting room to break down in tears,” Dahoud adds, his voice cracking.

According to the Gaza health ministry, Sari was the 142nd Palestinian to be killed by Israeli forces in Gaza since the beginning of the Great March of Return.

At least 25 more Palestinians have been killed in Gaza since, according to ministry figures.

“It makes me and the world proud that he didn’t get injured and die because of a brawl or a fight,” Dahoud says. “No, he got injured by the enemy.”

Despite the heartbreak and the grief, Dahoud vowed to move forward.

“I’m really happy that I was the one taking care of him and not anyone else,” he says. “I will return to my job as a doctor stronger than before.”