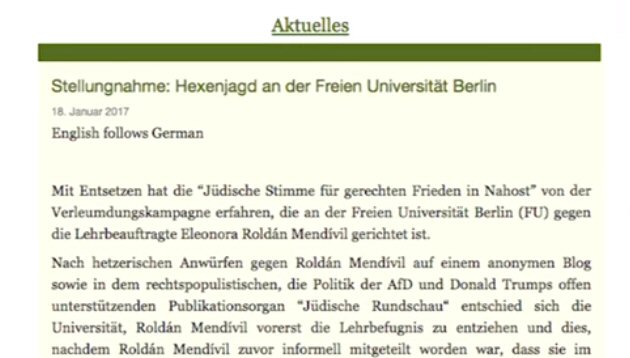 The Freie University of Berlin was founded while Berlin was divided by a wall between East and West. It was established to serve West Berlin as a symbol of liberal and democratic values. Indeed, the Department of Political Science, known as the Otto Suhr Institute has accumulated the reputation in Germany as an important center for the studies of political theory; a reputation which is now in jeopardy.

The disciplinary action against Eleonora Roldán Mendívil is very similar to a case in the University of Illinois, in which Professor Steven Salaita was denied a position because of his political stance on Palestine. We interviewed Professor Salaita on The Real News in 2014.

STEVEN SALAITA: A colleague suggested that I apply. I did. And I went through a really rigorous, long interview process. I was recruited for quite a while. Once the committee decided that they wanted to hire me, I had to go through all of the relevant tenure and promotion committees at the University of Illinois. Then they offered me the job. I accepted it. Immediately. This was in early October of last fall and everything was set to go until August 2nd of the summer when I received the termination letter from Chancellor Phyllis Wise.

SHIR HEVER: The story in Berlin started with a German right-wing newspaper called the Jüdische Rundschau and an Israeli right-wing newspaper The Jerusalem Post that attacked the lecturer, Eleonora Roldán Mendívil.
Interestingly, the student group at the university which used the newspapers as their source to attempt to expel Roldán Mendívil called itself a left political group, the Students Against Any Anti-Semitism.

Professor Bernd Ladwig was authorized by the department to handle the accusations against Roldán Mendívil. He decided to punish her and deny her the right to teach the next course even before she could defend herself. He proved unable or unwilling to distinguish between criticism of the State of Israel and anti-Semitism, which is racism against Jews.

Here to speak about this is Eleonora Roldán Mendívil. She is a lecturer at the Freie University of Berlin, a political scientist studying racism, sexism and capitalism. She also wrote several articles and appeared at conferences to present her research. Thanks for being here, Eleonora.

ELEONORA ROLDÁN MENDÍVIL: Thanks for having me.

SHIR HEVER: Let’s start by you telling us what course were you teaching at the university when all this scandal started?

ELEONORA ROLDÁN MENDÍVIL: I was teaching a class on racism and capitalism, so basically what I was trying to introduce into the German academia was a kind of counter  approach in the study of racism. So, looking into the study of racism concretely also within Germany and within the current dynamics in Germany from a more materialist perspective.

SHIR HEVER: And did the issue of Israel and Palestine come up in your class? Did you have arguments or disruptions in your class?

ELEONORA ROLDÁN MENDÍVIL: No. Actually we didn’t even mention Israel or Palestine so it was not part of the curriculum at all. The class was an introductory class within the Political Theory Department, meaning that we looked at concepts from Hegel over Marx and then we discussed … César and looked at some of the more recent Marxist researches on racism such as Adolph Reed, for example, from the U.S.

So, we didn’t actually look into the Israel-Palestinian conflict at all or even mention it within that context.

SHIR HEVER: Yes. Recently there was a public discussion at the Freie University about the limits of academic freedom. This discussion was assembled directly as a result of the complaint against you. Were you invited to sit on the panel and defend yourself against accusations against you?

ELEONORA ROLDÁN MENDÍVIL: No. Actually, the university didn’t contact me at all. I had to push through emails to actually have a discussion with Professor Ladwig for even knowing what kind of treatment the university will be and why they haven’t contacted me prior to their public statement.

I learned from this discussion that this discussion would take place amongst professors of the Otto Suhr Institute. In that talk that we had at the end of January, they said clearly that they would not invite lecturers like myself onto that podium because of our non-institutional affiliation, well, to the very same institute, so this was the reasons that they gave.

SHIR HEVER: Right. Well, I actually attended this discussion and there were people on the panel who were not professors and not affiliated with the Institute. Nevertheless … you.

SHIR HEVER: But I wonder if you can tell us what happened as a result of this discussion. Did it come to any kind of conclusion?

ELEONORA ROLDÁN MENDÍVIL: No. Actually, I was invited as a guest, as part of the public to attend that discussion. Afterwards there has been no email exchange whatsoever so I have not been informed what was the conclusion from the site of the Otto Suhr Institute.

SHIR HEVER: Right. Actually, I want to insert a question here and give you another chance to explain the situation. I want to ask you what is your situation right now? Is your next course cancelled? Is there still a chance you will be allowed to teach it?

ELEONORA ROLDÁN MENDÍVIL: Basically, I have a very precarious job because I am teaching a class which is only based on a contract for teaching one class only. So, basically these contracts can get renewed in some way, as in you propose a new class and then you can enter again this whole cycle and enter into another semester.

Basically, I have the luxury of, to this moment, to have a scholarship which allows me to teach classes because it’s paid very, very badly and to have some experience as a lecturer. Basically, I put in this class and they said to me that they will not accept it for the next term, which means the summer term of 2017 due to all these allegations and the whole situation and they don’t want to be connected to any kind of questions of anti-Semitism and all of that.

They said that they would review the requirements for teaching at the Otto Suhr Institute, which until now has been to have a BA degree, which I have. Right now I’m writing my Master’s thesis so they know that if they change the requirements just from a bureaucratic point of view, they cannot appoint me because I only have a BA degree and I’m only just now writing my MA thesis.

So, this a kind of tricky thing where they’re changing somehow the institutional requirements, which doesn’t make much sense as… if we look at it, I will not change my positions even if I have a PhD. So basically, I will not teach a class next term, not at the Otto Suhr Institute at least. And further they said that they will be in touch with me and if the report that … makes clears me of all the allegations then I might be able to apply again for a new precarious job at the University of Berlin… for the University of Berlin.

SHIR HEVER: This changing of the regulations which is actually a bureaucratic step is not just directed against you. It will actually be a sort of punishment for other lecturers at the university who have to suffer because the university wants to take action against you.

ELEONORA ROLDÁN MENDÍVIL: Exactly. And it doesn’t make much sense because the idea that is promoted here is what those right-wing bloggers were actually promoting, saying that I am a so-called political scientist because I “only” have a BA degree. So, questioning the validity of my degree at all.

And with this actually a lot of other students who right now were motivated, especially also who are in my class and are in the last term of their BA who were motivated now to hand in proposals for giving seminars at their old… their very own old institute. They will not have this opportunity and this is very sad, in fact, yeah.

SHIR HEVER: I met Professor Steven Salaita before. As you know, he eventually sued the University of Illinois and the university reached a settlement with him, paying him $875,000 compensation for wrongful dismissal. Do you intend to sue the Freie University of Berlin?

ELEONORA ROLDÁN MENDÍVIL: I don’t think that I can sue the Freie University of Berlin at all because of the nature of the contract that I have. I am part of the Education and Science Union, the GEW in Germany. I have been talking to colleagues there and basically what they told me is that from a legal point of view, I cannot get the right to have another class because these lectures, these seminars, are given every semester new even without any reasons the board deciding on who gets to lecture certain seminars can actually reject and accept lecturers.

So, this is a situation where our hands are bound from a legal point of view because it’s not that I was offered, let’s say, a position at the university. But I would come as an external academic worker to just give one class of one-and a-half hours a week. So basically, legally there is unfortunately nothing to be done but this is something that we’re looking into from the perspective of the Science and Education Union and this is something that we have been scandalizing for a long time and I think there is still a lot of work to be done there. We will continue on that line, too. But this is not specific on my case. This is some more, you know, labor unionist point of view that I’ve been pushing in here as well.

SHIR HEVER: Yeah. Well, thank you very much for joining us, Eleonora.

ELEONORA ROLDÁN MENDÍVIL: Thanks for having me.

SHIR HEVER: And thank you for joining us at The Real News Network.