Groups Call for Halt to Attacks on Journalists 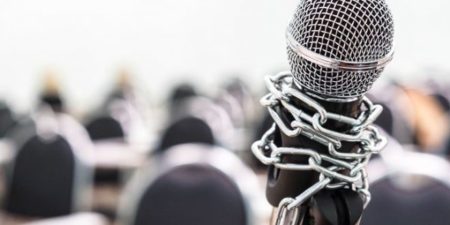 On 9 July, 33 press freedom and media development organizations met in London, in advance of the Global Media Freedom Conference to call on all participating States, to ensure the protection and safety of all journalists and media workers in compliance with their existing obligations and international standards, the Palestinian Center for Development and Media Freedoms (MADA) reported.

The groups, representing and working with hundreds of thousands of journalists and media workers, said new pledges will only be credible if States immediately:

The groups also demanded all States hold themselves and their counterparts accountable and show demonstrable progress. Several States attending the Conference currently have journalists in prison and unsolved murders, PNN reports.

They put forth 11 recommended commitments for States attending the Global Media Freedom Conference, hosted by the governments of the United Kingdom and Canada:

In related news. Hind Awwad, a Palestinian human rights advocate who is associated with the Boycott, Divestment, and Sanctions (BDS) movement, has stated that Israel’s attack on Anadolu Agency’s office in the Gaza Strip earlier this year is but one of its many criminal attacks on the media. On May 4, Israeli warplanes struck the building in Gaza where the office was located with at least five rockets following warning shots. No injuries or deaths were reported, but the building was destroyed.

“Israel’s attack on the office of Anadolu Agency in Gaza was a serious violation of international law. It is one of Israel’s many criminal attacks on journalists which aim to prevent documentation and reporting on Israel’s systematic policies of occupation, settler-colonialism, and apartheid against the Palestinian people,” she continued.

In an interview marking the BDS’ 14th anniversary, Awwad said it has always called for an extensive military embargo against Israel because of its denial of Palestinians’ rights and attacks especially on journalists in Gaza.

“We appeal to Turkey to take the lead in ending all military trade with Israel,” she said.