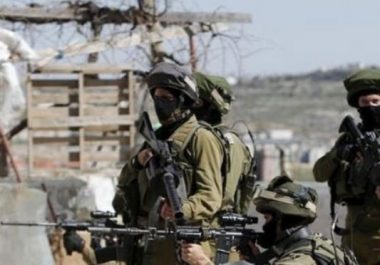 The Palestinian Health Ministry has reported that Israeli soldiers injured, Wednesday, 378 Palestinians, including 42 who were moved to hospitals for further treatment, in several parts of occupied Palestine, including the occupied Capital Jerusalem. The soldiers also abducted many Palestinians.

The Ministry said that the ongoing Israeli aggression and military escalation against the Palestinian people, have led to the injury of 2281 persons, including 469, who were moved to various hospitals and medical centers in the West Bank and the Gaza Strip.

It added that the soldiers injured 379 Palestinians, on Wednesday, in several parts of occupied West Bank.

The soldiers shot two Palestinians with live fire in Ramallah governorate, four with rubber-coated steel bullets in Bethlehem, nine others in Hebron, including two live rounds, two in Nablus, four in Tulkarem, and five in Jericho.

Medical sources in Nablus, said the soldiers shot three with rubber-coated steel bullets, and many others suffered the effects of teargas inhalation, near Huwwara military roadblock, south of the city.

The soldiers also invaded Sebastia town, north of Nablus, and broke into homes before occupying their rooftops.

In occupied Jerusalem, the soldiers resorted to the excessive use of force against Palestinian protesters in Bab al-’Amoud, causing at least three Palestinians to suffer cuts and bruises, and one suffocated after the soldiers sprayed his face with gas.

The soldiers chased and assaulted dozens of women, marching near the Al-Aqsa Mosque, and closed the entire area, before attacking journalists, and abducted at least three Palestinians.

On Wednesday evening, the soldiers invaded Halhoul town, north of Hebron, and abducted five young men, bringing the number of abducted Palestinians in Hebron governorate alone to 16, including two young women, in less than 24 hours.

Also in Halhoul, the soldiers abducted nine Palestinians, including the two young women; one of them has been identified as Manar Khader Abu Rayyan, 17, who suffered the severe effects of teargas inhalation, in addition to young man, Monther al-Atrash, who was abducted in the same military assault.

In Hebron city, the soldiers ambushed and abducted eight young Palestinian men near Bab az-Zawiya area, and took them to an unknown destination.

Two other Palestinians were shot with gas bombs, which directly struck their bodies, and at least three who were injured by Israeli missiles and shells.

It is worth mentioning that Israeli officers have also detained 367 Palestinian workers, allegedly for “entering Israel without permits.”

It is worth mentioning that, since U.S. President Donald Trump announced his illegal recognition of occupied Jerusalem as the unified capital of Israel, one week ago, six Palestinians, identified as Mustafa al-Sultan, 29, Hussein Nasrallah, 25, Mohammad as-Safadi, 25, Mahmoud at-‘Atal, 29, Maher Atallah, 54, Mahmoud al-Masri, 30, have been killed by Israeli army fire and missiles, and one woman, Hamda Zubeidat, 60, died of a heart attack when Israeli soldiers hurled concussion grenades near her, just as she opened her door.

On December 6th, a Palestinian child, identified as Mohammad Saleh Abu Haddaf, 4, died from serious wounds he suffered on August 8, 2014, when Israeli army drones fired missiles at his family’s home, and several nearby homes, in al-Qarara town, north of Khan Younis, in the southern part of the Gaza Strip.

Palestinian Teen in Viral Photo to Appear in Israeli Court