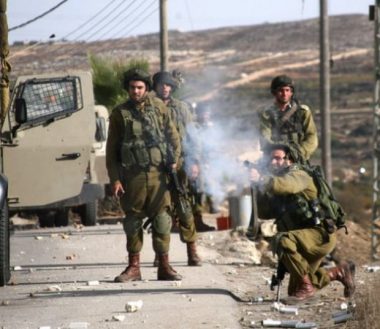 Media sources in Tubas said the soldiers fired many gas bombs and concussion grenades at Palestinians, protesting the invasion, in addition to directly targeted surrounding homes.

They added that many Palestinians, including six members of one family, suffered the severe effects of teargas inhalation, and were rushed to a local hospital.

The soldiers also invaded and searched several homes in the city, and abducted a young man, identified as Wisam Majeed Sawafta.

On Thursday at dawn, the soldiers detained a young Palestinian man, and installed many roadblocks, in Jenin governorate, in the northern part of the occupied West Bank.

On Wednesday at night, Israeli sources said a colonialist settler was injured after Palestinian youngsters hurled stones at a bus in Pisgat Ze’ev, in occupied Jerusalem.

Also on Wednesday at night, a Palestinian taxi driver, identified as Morad Somrain, suffered cuts and bruises to various parts of his body, including his head and face, after Israeli colonialist settlers assaulted him in Jerusalem, and was rushed to a local hospital.