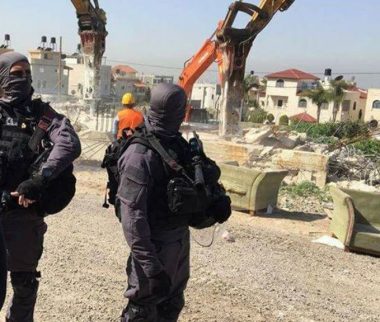 The Israeli government announced, Monday, it would be resuming work to complete a bypass road linking Anatot illegal colony, in occupied East Jerusalem, with Road #1 (Jerusalem – Dead Sea Road) with a bugged of hundreds of millions of Shekels.

Israel Hayom (Israel Today) News Agency has reported the road is first section of a planned six-miles bypass road aimed at circling East Jerusalem, and connecting settlements in its northern and southern parts.

The Palestinian Quds Press News Agency has reported that, when Israel started planning for the road, it illegally confiscated large areas of privately-owned Palestinian lands, and recently  approved the needed budget in order to resume the work.

The agency added that after an agreement was reached, Israel decided to resume the construction next week, to conclude the project.

The project falls under the authority of the Israeli “Civil Administration Office,” which runs the occupation of the Palestinian territories, in addition to the “Border Guard Police,” and extends 3.5 Kilometers, starting from Road #437 near Anatot military base, until Road #1 at the Al-‘Isawiyya Junction, in East Jerusalem.

The new road is part of a much larger project which includes a 10-kilometer highway around the eastern area of occupied Jerusalem, linking between Israeli colonies in the northern and southern part of the city.