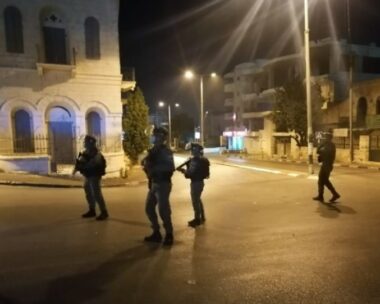 Israeli soldiers attacked, on Wednesday evening, a nonviolent procession at the northern entrance of Bethlehem city, south of the occupied capital, Jerusalem, in the West Bank.

Local sources said dozens of residents marched from Bab Zqaq area, in the center of the city, and headed towards Bethlehem’s northern road, protesting the escalating Israeli violations against the detainees.

They added that the soldiers fired a barrage of gas bombs and concussion grenades at the protesters, causing dozens to suffer the effects of tear gas inhalation.

The procession was organized by local civil committees, the Palestinian Prisoners Society, and the Palestinian Detainees and Ex-Detainees Committee, in protest of the seriously escalating Israeli violations against the political prisoners.

The protesters chanted for the liberation of Palestine, the release of all detainees, and called for national unity and ongoing struggle until liberation and independence.

On Wednesday evening, the soldiers injured dozens of Palestinians, and abducted one, during protests in Arraba town, south of the northern West Bank city of Jenin. The soldiers also invaded orchards and farmlands and conducted extensive searches.