Including A Child, Israeli Army Injures Dozens Of Palestinians In Hebron 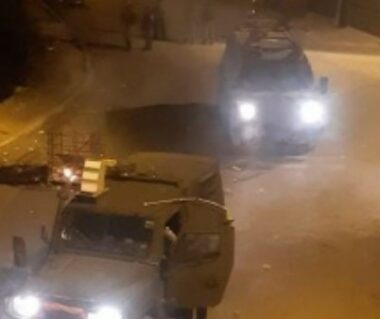 Israeli soldiers injured, on Wednesday at night, dozens of Palestinians, including a child, in Beit Ummar town, north of the southern West Bank city of Hebron, after the army attacked protesters who marched in solitary with the detainees in Israeli prisons.

Local activist, Mohammad Ayyad Awad, stated that the Palestinians marched towards the northern entrance of the town before the soldiers attacked them with live rounds, rubber-coated steel bullets, and gas bombs.

He added that several youngsters hurled stones at the soldiers who fired additional gas bombs and live rounds.

Medical sources have confirmed that dozens of Palestinians suffered the effects of tear gas inhalation, in addition to cuts and bruises.

They added that a child, only eight years of age, suffered various wounds from fragments of a bullet while she was in her home in the town.

The Palestinians were marching in solidarity with the Palestinian political prisoners in Israeli prisons, who are subject to seriously escalating Israeli violations, especially after six detainees managed to escape from the high-security Gilboa Israeli prison.