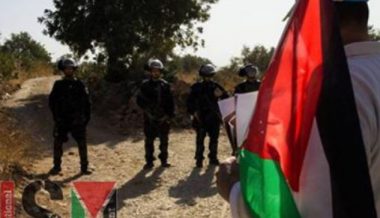 The Popular Committee in Ni’lin said the soldiers assaulted the nonviolent protesters as they reached a construction site of the illegal Israeli annexation Wall, isolating the villagers from their lands.

It added that the soldiers fired many gas bombs and concussion grenades, causing scores of protesters to suffer the effects of teargas inhalation.

Mohammad Abdul-Qader ‘Amira, the coordinator of the Popular Committee against the Wall and Colonies in Ni’lin, said the soldiers deliberately fire gas bombs at many homes, causing several Palestinians, especially children and elders, to suffer the severe effects of teargas inhalation.

This week’s protest also marked the second anniversary of the death of Palestinian government minister, Ziad Abu Ein, who was killed by Israeli soldiers during a nonviolent activity, near Ramallah, in December 2014.