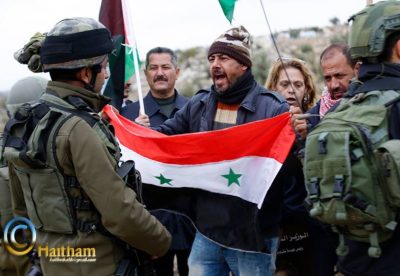 The protest was held by approximately 20 international activists, 20 Palestinians and 10 Israelis, who marched from the center of the village, carrying Palestinian flags and heading towards the villager’s isolated orchards. They also carried posters of late Palestinian government Minister, Ziad Abu Ein, who was killed by Israeli soldiers during a nonviolent activity, near Ramallah, in December 2014, and chanted against the ongoing illegal Israeli occupation, colonies and escalating violations against the civilian population in occupied Palestine.

The army assaulted the protesters as they approached the gate of the Annexation Wall, and fired many gas bombs and concussion grenades at them, causing many to suffer the effects of teargas inhalation.

The soldiers also detained an Australian peace activist, and held him for several hours before releasing him.