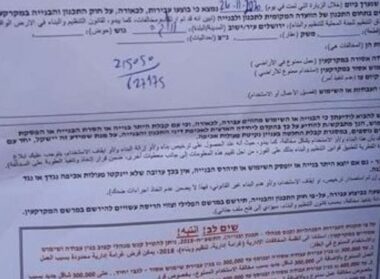 Israeli soldiers invaded, Monday, the Palestinian town of Sebastia, north of the northern West Bank city of Nablus, and handed an order halting the construction of a home.

Mohammad Azem, the mayor of Sebastia, stated that several Israeli army jeeps invaded the town, and surrounded an area where the house is located.

Azem added that the soldiers handed Mohammad Fathi Abu Saoud, a military order halting the construction of his home allegedly for not being licensed by the so-called Civil Administration Office, the administrative branch of Israel’s illegal occupation.

Earlier this month, the soldiers invaded Sebastia before demolishing an agricultural room and bulldozing farmlands surrounding it.