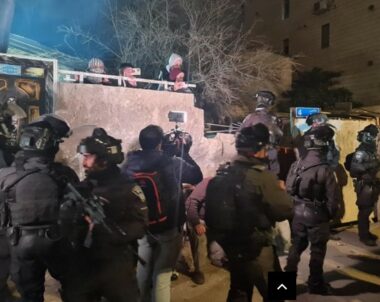 On Thursday evening, Israeli soldiers and police officers imposed a strict siege on the Sheikh Jarrah neighborhood, in the occupied capital, Jerusalem, in the West Bank, before attacking many families and solidarity activists.

Media sources said the soldiers surrounded the neighborhood from all directions and prevented the Palestinians from entering or leaving it. Instead, they allowed groups of fanatic colonizers to invade it and conduct their provocative march calling for expelling the Palestinians.

The sources added that the police and the soldiers assaulted the Palestinians and the solidarity activists and prevented the medics from entering the area to provide the needed treatment for the wounded.

The soldiers installed iron barriers, especially near the home of the local Salem family, which is facing forcible eviction from their home in the western area of the neighborhood to be replaced with illegal colonizers.