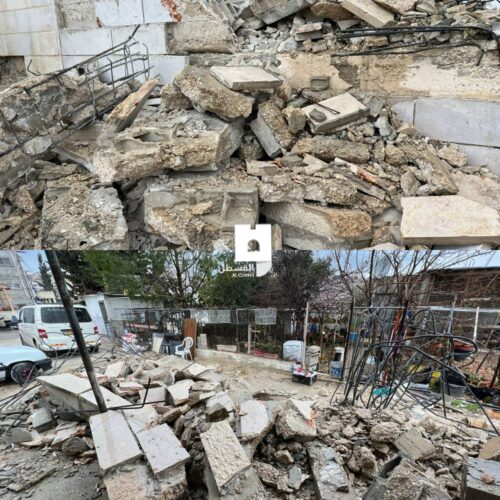 The Israeli municipal government in Jerusalem issued an order forcing the Obaid family to demolish their family home in al-‘Isawiya — an area that is currently under intense Israeli colonization — under the pretext that it was “constructed without a permit”. Israeli military authorities, which have ruled the Palestinian Territories under martial law since 1967, have refused to issue Palestinian landowners construction permits to build on their own land since beginning their military occupation in 1967.

The demolition renders Nassim Obaid and his five children homeless, with no place to live. The family had constructed the home on their family land, where they have owned the property and lived for generations. Palestinian groups have called the demolition order, which required Obaid to pay for demolition equipment and demolish his own home, unjust and a violation of international human rights laws.

What can be harder and more painful than demolishing your home with your own hands?

With a painful tone, the #Jerusalemite Naseem Abeed is talking about his feeling after he was forced to self-demolish his own home in Al-Isawiya town, occupied #Jerusalem. pic.twitter.com/hBkmwsZXWv

Palestinians who are issued demolition orders by the Israeli military rulers have no legal recourse, as the courts do not allow for Palestinian landowners to obtain permits.

Close to one million Israelis have moved into illegal colonial settlements on stolen Palestinian land – most of them within the past twenty years.