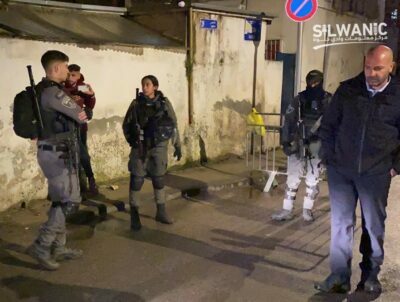 Israeli soldiers attacked, on Saturday night, many Palestinians in Sheikh Jarrah neighborhood in the occupied capital, Jerusalem, and forced them to leave while allowing fanatic Israeli colonizers to march and call for expelling them.

The Wadi Hilweh Information Center In Silwan (Silwanic) said the soldiers assaulted the Palestinians with batons and dragged many of them in addition to firing gas bombs.

Silwanic added that the army continued the strict siege on Sheikh Jarrah to prevent the Palestinians and solidarity activists from reaching it.

For more than a week now, the Palestinians in Sheikh Jarrah have been subject to renewed and escalating Israeli violations and assaults, leading to injury and the abductions of dozens of residents.

|OCHA: Joint Statement of the Humanitarian Country Team on the Imminent Eviction of the Salem Family in Sheikh Jarrah in East Jerusalem|

Sheikh jarrah indigenous palestinian jerusalemite activist muna el-kurd describes situation in the highly-tense occupied jerusalem neighborhood which has been under ‘Israeli’ siege for over a week pic.twitter.com/WYWoDXYbwC