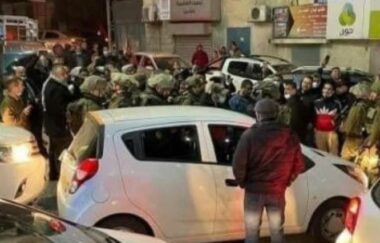 Groups of fanatic illegal Israeli colonialist settlers closed, on Thursday evening, many roads and junctions, in the northern part of the occupied West Bank, and attacked homes, before the soldiers abducted a young Palestinian man.

Eyewitnesses said the colonists gathered at Huwwara junction, south of the northern West Bank city of Nablus, and closed it.

They added that the colonists prevented the Palestinians from crossing the junction and threatened to harm them if they do not leave.

The colonists also gathered at a junction near the illegal Shilo colony, on the Nablus-Ramallah road, and near Mukhmas junction.

In addition, the colonists attacked homes in Burin village, southwest of Nablus, leading to protests before the soldiers invaded the village and fired many concussion grenades and flares at the Palestinians.

The soldiers also abducted a young man, identified as Hamdan Hashem Najjar, in his thirties, and took him to an unknown destination.