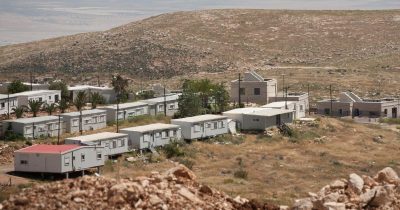 An Israeli Court ruled on Tuesday that an Israeli colony that was established on stolen Palestinian land can be recognized and legitimized by the Israeli state, thus setting a precedent for further expansion of colonies onto Palestinian land.

This is despite the fact that all Israeli settlement colonies are considered illegal under international law, due to the fact that they are created through the seizure of Palestinian land through military force

The Jerusalem District Court issued the ruling, with Judge Arnon Darel agreeing with the Israeli settlers in their argument that they obtained the land “in good faith” – even though the land was, in fact, stolen from its Palestinian owners.

The colonial outpost in question is called Mitzpeh Kramin, which was established in 1999 on six plots of land: one of which was owned by the Israeli government (after having been taken from its Palestinian owners in 1948), and the other five of which were owned by Palestinians who held the legal deeds to the land.

According to the judge, because the colonial settlers moved onto the land “in good faith”, their takeover is legally justified.

The Israeli daily Ha’aretz reports that “the government did not know at the time [1999] that the land was privately owned because of confusion in the mapping of the area, and now admits that the land should not have been allocated to the settlement.”

acording to Ha’aretz, “In 1999, 10 buildings were constructed in what is now Mitzpeh Kramim with permits and help from the government. Since then, more structures have gone up – but without permits.

In 2011, Palestinians petitioned the High Court of Justice asking to revoke the master plan for Mitzpeh Kramim and prevent any further building. This case has been frozen for now, partly because of the proceedings underway concerning the new law on expropriation of privately-owned land in the West Bank in return for above-market compensation. Known as the regularization law, the new law legalizes previously illegally seized land used for Jewish settlement.”

The case sets a precedent for more illegal colonies constructed through the forced seizure of Palestinian land, often accompanied by violence carried out by paramilitary Israeli settlers, to be ‘recognized’ and ‘legalized’ by the Israeli government.