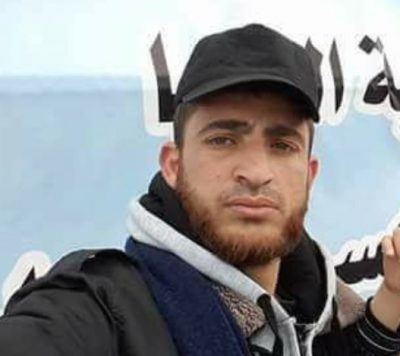 After Israeli tanks spent the day, on Wednesday, firing artillery shells at numerous sites in northern and eastern Gaza, the Israeli military stepped up its assault on the coastal enclave Wednesday night with bombs dropped by the Israeli airforce which killed one Palestinian and injured another.

The Palestinian who was killed was identified as Mohammad Hjeila, 31.

He was hit by a bomb dropped by an Israeli fighter jet Wednesday night east of the Sheja’eyya neighborhood, in the eastern part of Gaza City.

Hjeila was with the al-Qassam Brigades, the armed wing of the Hamas party. His brother, Adham Hjeila, had been killed by Israeli forces in 2004.

The Israeli military claimed that during this invasion, an explosive device exploded near one of the militarized bulldozers.

Israeli forces stationed at the border then fired at least five shells east of Gaza City in the Sheja’eyya and al-Zeitoun neighborhoods. A Palestinian was moderately wounded by the shelling and taken to Shifa Hospital in Gaza City.

Later in the evening, the Israeli military sent in fighter jets to drop bombs in the same areas, which they claimed were being used as training sites for resistance fighters. According to Israeli media sources, Palestinian resistance fighters tried to shoot at the jets with guns. One bullet allegedly hit the roof of an Israeli house in a town adjacent to the border with Gaza, causing very slight damage.

In Gaza, dozens of houses near the site of the bombing had their windows blown out due to the ‘sonic boom’ from the bomb.

This escalation by the Israeli military follows two weeks of non-violent protests by Palestinians in Gaza along the border fence with Israel. The Palestinians protesting at the fence are asking for an end to the decade-long siege of the tiny coastal strip, and the right of return for Palestinian refugees.

Through the siege, Israeli forces, who control the land, sea and air of Gaza, have prevented essential goods like fuel, medicine, building materials, maintenance equipment for electric and sewage plants, vehicles, books, medical equipment and many food items from entering Gaza. Palestinians have also been unable to leave Gaza for the past ten years, apart from very rare exceptions in which Palestinians who apply for a permit from Israel and wait for months or even years are sometimes allowed to leave.