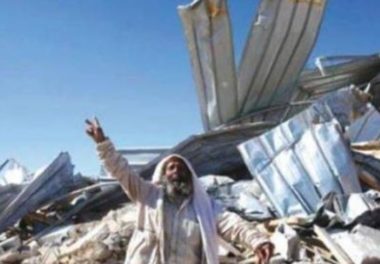 In the agriculturally-rich northern West Bank area of Al-Aghwar, Israeli forces demolished a Palestinian-owned livestock tent, according to a local activist.

Daraghma said that the pen is owned by Palestinian resident, Abdelrahman Qasem, who was shocked to see his crude tin sheet animal pen had been destroyed by the army.

Noteworthy, many water pipelines in the Al-Aghwar area in the Jordan Valley, were recently severed, as a result of military exercises. In addition, a number of green houses, owned by local farmers, have also been dismantled by the military.

The Palestinian Al-Aghwar area is vast and fertile agricultural land, said to be a main source of produce for the entire West Bank population.

High-ranking Israeli officials have signalled their intention to expropriate the Al-Aghwar area to the sovereignty of the occupation state, subjecting it to full Israeli control, by early next month.

Various international players including the United Nations (UN), European Union (UN), Russia and the Arab League have rejected Israel’s plan to take-over. These groups have warned that the consequences could be the loss of a chance for a just and lasting peace, based on the two-state solution.

The United States (US) as the main supporter of Israel, has asked the Israeli government to consider delaying the move, due to the current Coronavirus pandemic and the social unrest in the US.