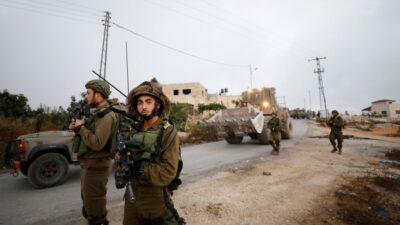 On Thursday morning, Israeli forces invaded the village of Rojib, east of Nablus in the northern part of the West Bank, and took measurements of the home of Palestinian prisoner Khalil Dweikat in order to demolish the home.

According to the Palestinian News Agency Wafa, the soldiers also interrogated Dweikat’s family members, including his brother, his wife, and his six children.

Dweikat was abducted Wednesday and accused of killing an Israeli man in the Israeli town of Petah Tikva. His family has had no contact since he was abducted, and do not know his whereabouts.

The crime that Dweikat is accused of is the stabbing of Shai Ohayon, 39, on Wednesday. The Israeli man died of multiple stab wounds after a stabbing attack that was allegedly carried out by a Palestinian worker in Petah Tikva, in central Israel.

Israeli Prime Minister, Benjamin Netanyahu announced to the nation that his government, “will work to demolish the terrorist’s house and carry out the most severe punishment.”