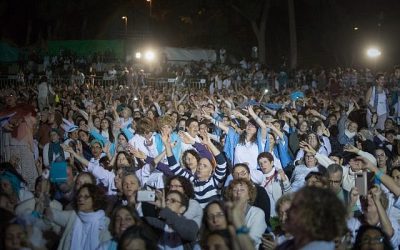 A two-week march led by Israeli women calling for peace culminated in a rally in Jerusalem Sunday, although the march was largely boycotted by Palestinians who called it a part of the‘normalization’ of the Israeli occupation of Palestinian land.

The organizers of the march called for a return to the failed negotiations between the Israeli government and the Palestinian Authority – negotiations that were harshly criticized by most Palestinians for the power imbalance they maintained between the occupier and occupied.

‘Normalization’ is a term used by Palestinians to refer to efforts that claim to promote ‘peace’ without recognizing or addressing the extreme injustice of the Israeli military occupation. Some have criticized the ‘Women Wage Peace’ movement for its failure to advocate for Palestinian equal rights, instead issuing a vague call for ‘peace’.

Many of the participants in the march voiced a desire to have reconciliation with Palestinians, and said they hoped to meet with Palestinian women, with organizer Anat Negev saying that, “We all want a safe future for our children.” But Palestinian women’s organizations and civil society leaders said that the march was naive in issuing a call for peace without a clear call for justice, and for the end to the Israeli military occupation.

Some women marched for two weeks, in different parts of the West Bank, Israel and Jerusalem – but most of the locations of the march were closed to Palestinians who did not obtain special permits months in advance to be able to enter.

In response to the march and rally, the Union of Palestinian Women’s Committees issued a statement opposing the event, saying that Palestinian women were being used as props and tokenized by the Israeli women organizing it. The statement also said, “This activity is a shameless fraud that seeks to forcibly impose normalization with the occupier upon Palestinian women, in clear violation of the sacrifices of our women martyrs, prisoners, wounded and strugglers to liberate our people from that occupier. Our position as a Palestinian women’s movement in occupied Palestine against normalization is very clear, as is our demand for the boycott of occupation in all forms, including economic, cultural, academic and all other forms of boycott.”