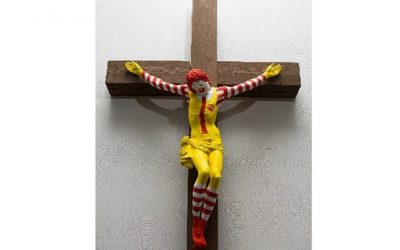 Hundreds of Palestinian Christians and their supporters gathered Friday in Haifa, in northern Israel, to protest an Israeli exhibit that featured Ronald McDonald taking the place of Jesus on the cross.

The so-called “McJesus” exhibit was created by Finnish artist Jani Leinon, and has been on display at a gallery in Haifa as part of a gallery exhibition called ‘Sacred Goods’.

It recently came to the attention of church authorities in Haifa, who called for the protest.

The Greek Patriarchate said “While we express freedom of expression, this should not include mocking and targeting our religion and religious figures”.

The Patriarchate added that they blame the municipality of Haifa for this exhibit. They said that the Municipality collects taxes, including from those Christians that were insulted by this exhibit. This was especially insulting because the timing of the exhibit came just as the Greek Orthodox Christians were celebrating Christmas, according to their calendar.

The Israeli authorities claimed that the night before the protest, an unknown person threw a flaming bottle at the museum, causing minimal damage.

During the protest on Friday, Israeli police say that three of their officers were hit by rocks and bottles and injured. Dozens of Palestinian protesters were treated for the effects of tear gas inhalation.

The Israeli Cultural Minister, Miri Regev, on Thursday weighed in on the issue, saying that she had received “ many complaints of serious offense caused to the Christian community’s feelings”, and asked the Director General of Haifa Museums to remove the controversial artwork.