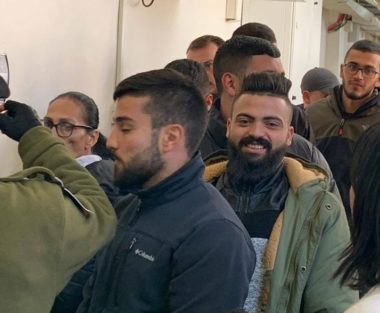 The Israeli Prosecutors’ office in occupied East Jerusalem filed, Monday, an indictment against five young Palestinian men from the al-Isawiya town, accusing them of violating the “nighty house arrest orders” which were issued against them previously.

Lawyer Mohammad Mahmoud said the Israeli prosecutor filed the indictment against the five detained young men, and that the court ordered their conditional release until a final verdict is reached.

Mahmoud added that Anwar Sami Obeid and Saleh Abu ‘Assab were will be released after paying 5000 Shekels fine each, in addition to imposing open-ended nightly house arrest orders against them.

He also said that Fayez Mheisin and Nadim Safadi were ordered to pay a 4000 Shekels fine each, as a condition for their release in addition to being forced under open-ended nightly house arrest orders.

The five young men are scheduled to be released Wednesday; however, they also stated that they reject the house arrest and the fines, and their lawyer intends to appeal against the ruling.

In addition, another Palestinian, identified as Yacoub Dabbagh, was released on the condition of not being allowed into the Al-Aqsa Mosque until next Sunday.