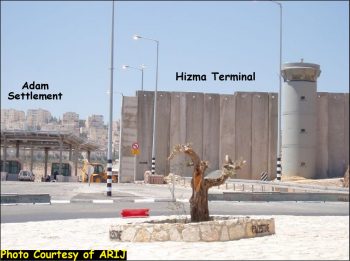 A 19-year old Israeli settler was apparently mistaken for a Palestinian and immediately shot to death by Israeli soldiers at the Hizme checkpoint near Jerusalem. Israeli military standard procedure is to shoot to kill any Palestinian who appears to be attempting to attack or approach soldiers, while their standard procedure toward Israeli attackers is to subdue them without using violence.

According to a statement by the Israeli police, “A Jewish man was killed by Israeli border officers at the Hizme checkpoint north of Jerusalem after he tried to stab an Israeli soldier. The security officers felt immediate danger for their lives and took measures to neutralize him.”

The 19 year old, who has not been identified, was transported to the hospital in critical condition and was pronounced dead upon arrival.

Initial Israeli reports of the incident indicated that the teen killed was Palestinian, but he was later found to be an Israeli settler from Pisgat Ze’ev, a colonial settlement constructed illegally on Palestinian land in the West Bank.

According to the Israeli police report, “The checkpoint was closed following the incident to allow for further investigation.” Some Israeli media have reported that the young man was suicidal, but that allegation has not been confirmed.

He was allegedly carrying a pocket knife when he approached the checkpoint and was mistaken for a Palestinian, leading to the Israeli soldiers shooting him with multiple rounds and killing him. If he had been recognized by the soldiers as a Jewish Israeli, a different and less violent set of rules would have applied.

Israeli settlers who use violence are subject to a different set of laws than Palestinians, who are subjected to a ‘shoot to kill’ policy whether or not they are carrying a weapon.