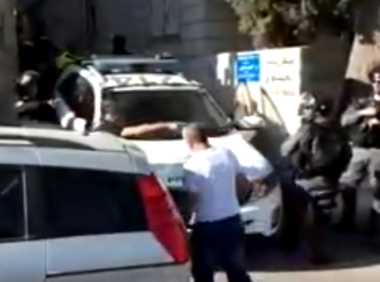 Israeli soldiers abducted, on Thursday evening, a Palestinian mother from the al-‘Isawiya town, in occupied East Jerusalem, to pressure her child, Mahmoud, to turn himself in to the police.

The Wadi Hilweh Information Center in Silwan (Silwanic) has reported that the soldiers abducted the mother of a “wanted” child, identified as Mahmoud Obeid, to pressure him and his family.

Silwanic added that the army has informed the family that the mother will remain in prison until her child turns himself in to the police for interrogation.

The soldiers also abducted three young man in Bab al-‘Amoud area, in Jerusalem, and interrogated them for several hours before releasing them.