11 Palestinian Prisoners on Hunger Strike against Administrative Detention, Call for Solidarity and Action 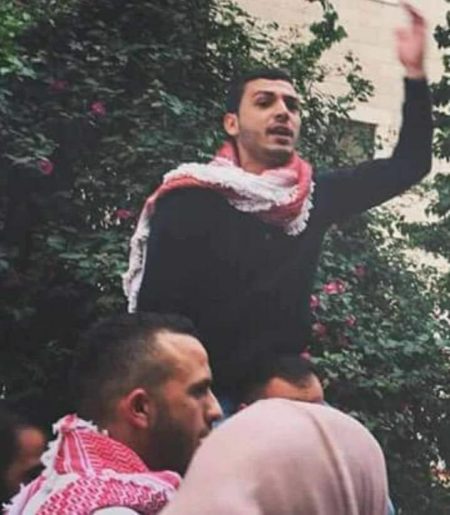 Three more Palestinian prisoners launched a hunger strike on 1 July 2019, joining eight already refusing meals in protest. Mohammed Nidal Abu Aker and Mohammed Attia Hassanat, both of Dheisheh refugee camp near Bethlehem, and Huzaifa Halabiya from Abu Dis in Jerusalem all began an open hunger strike against their Israeli administrative detention, imprisonment without charge or trial. All three are held in the Negev desert prison with no charges and no trial, on the basis of secret evidence.

They join several more Palestinian prisoners who have been on hunger strike against administrative detention. Jafar Ezzedine, 48, a former long-term hunger striker, and Ihsan Othman, 21, have been on hunger strike since 16 June and 18 June. Ezzedine launched his strike after he was supposed to be released from a five-month sentence in Israeli prison but was instead transferred to imprisonment without charge or trial; Othman launched his strike two days later. A student at Al-Quds University, his repeated detention has prevented him from graduating and receiving his degree.

Six more Palestinian prisoners, all jailed without charge or trial under administrative detention, joined the hunger strike: the brother Mahmoud and Qaid al-Fasfous, Ghandafar Musa Abu Atwan, Abdel-Aziz Waleed Sweiti, Qais Khaled al-Nammoura and Ahmad Zahran. These six prisoners are all from the al-Khalil (Hebron) area and are detained in Ofer prison. Ezzedine is jailed in Megiddo prison, where he has faced ongoing night inspections with dogs and other forms of repression in an attempt to compel him to end his strike.  A disciplinary court in Megiddo prison convened by the prison director ordered him to solitary confinement and denied him access to family visits or the “canteen” (prison store) for one month in retaliation for his protest.

All of the striking prisoners are demanding an end to administrative detention. These orders are issued for one to six months at a time; they are indefinitely renewable, and Palestinians have spent years at a time jailed without charge or trial under the basis of “secret evidence.” There are currently about 500 Palestinians jailed without charge or trial under administrative detention out of a total of approximately 5,500 Palestinian prisoners.

The Prisoners’ Affairs Commission said that some of the striking prisoners are already suffering from health complications, including severe weakness, difficulty moving, serious headaches, dizziness and yellowness of the skin.

The escalating struggle against administrative detention comes as all 47 Palestinian prisoners held in Ashkelon prison were suddenly transferred to other prisons. Last month, these prisoners conducted a one-day hunger strike to demand an end to the repressive raids and attacks against the prisoners, the lifting of financial sanctions and treatment for ill prisoners. They ended their strike after an agreement to implement their demands; however, in a new form of collective punishment aimed at dismantling the prisoners’ movement, all were transferred on 1 July to other Israeli prisons.

The Prison Branch of the Popular Front for the Liberation of Palestine issued a statement urging support for the prisoners and calling for action, noting that its comrades Mohammed Abu Aker, Mustafa Hassanat, Huzaifa Halabiya and Ahmad Zahran had already taken a leading role in the strikes to confront administrative detention. They said that additional prisoners would be joining the strike in the coming days as part of a strategy of escalating struggle for an end to imprisonment without charge or trial, and urged actions in solidarity:

“1. We call for the formation of a committee to support the administrative detainees through public events and struggle on the ground.

2. We call on the National Committee for the Great March of Return to adopt a Friday to support the administrative detainees on hunger strike, and for this Friday to be a Palestinian day of action throughout occupied Palestine and in exile and diaspora.

3. We call on the prisoners, especially those who have successfully conducted the battle of empty stomachs and have been victorious in the past years, to make an announcement of a support strike in solidarity with the administrative detainees on hunger strike, in front of the headquarters of the Red Cross as a unified action with a specific date.

4. We call on Palestinian national organizations to take action, erect tents in public spaces and call for days of public anger and protest of the occupation.

5. We call on the Palestinian lawyers’ associations to launch a broader campaign of support and solidarity with the administrative detainees and especially the hunger strikers at a local, regional and international level, giving this issue significant attention.

6. We call on the Palestinian Journalists’ Syndicate to work to create a unified day for radio broadcasts in support of the administrative detainees on hunger strike and highlighting the issue of administrative detention.”

They concluded by noting that “This battle will continue, and many of the strugglers will participate in successive groups of strikers, until achieving the goal. We are confident in the popular support that is always provided by our resisting Palestinian masses.”

Samidoun Palestinian Prisoner Solidarity Network urges all to stand with these courageous prisoners who have put their lives on the line to seek freedom and an end to the unjust system of administrative detention. International solidarity can help them win their struggles, so all of our participation, protests, petitions and phone calls can play a role in helping them to seize victory for justice and freedom.