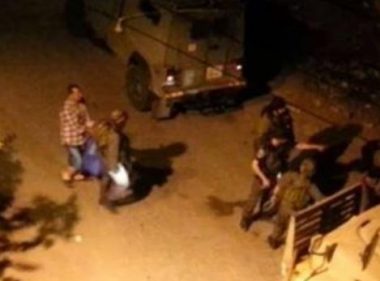 Israeli soldiers abducted, on Wednesday at dawn, at least twenty-one Palestinians from their homes, in several parts of the Wes Bank, including Jerusalem, and injured one.

The soldiers also invaded many neighborhoods in Hebron city, and interrogated several Palestinians while inspecting their ID cards.

It is worth mentioning that the soldiers shot Bara’ Mohammad As’ad, 17, near the Annexation Wall in Tulkarem, in northern West Bank, before Palestinian medics rushed him to a local hospital.

In Ramallah, in central West Bank, the soldiers abducted Tha’er Mohammad Bader, 43, and his brothers Ashraf, 39, and Tamer, 30, in addition to Qussai Zahran.

In occupied Jerusalem, the soldiers invaded homes and abducted eight Palestinians, including two siblings, in several parts of the governorate.

They have been identified as Mohammad, 18, and Yazan ‘Oleyyan, 20, Younis Abu al-Hummus, Mahmoud Mustafa, Qassem Dirbas, Abdul-Qader Abi Sayma, Ahmad Abu Shammala, and Yousef Erekat.
It is worth mentioning that Israeli Agriculture Minister Uri Ariel, have led dozens of illegal colonialist settlers, accompany by the police, into the courtyards of the Al-Aqsa Mosque, after forcing many Palestinians away.

The Islamic Waqf and Endowment Department in Jerusalem said the colonists conducted provocative tours in the courtyards of the holy site, after the soldiers removed the Palestinians.