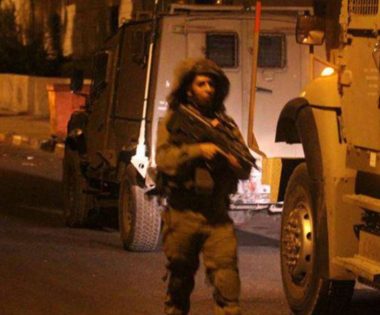 Israeli soldiers abducted, on Thursday at dawn, two former political prisoners from their homes in Beit Ummar town, north of the southern West Bank city of Hebron, and summoned four Palestinians for interrogation.

The soldiers also invaded and ransacked homes in the center of the town, in addition to Beit Za’ta area, and summoned many Palestinians, including an elderly man, for interrogation at the Etzion military and security base, north of Hebron.

The summoned Palestinians have been identified as Yousef Hasan Ekhlayyel, 64, his sons, Aktham, 258, and Karam, 18, in addition to Hammad Ahmad Abu Mariya, 26.

Clashes also took place between the invading soldiers, who fired many gas bombs and concussion grenades, causing many residents to suffer the severe effects of teargas inhalation, and local youths, who hurled stones at the military vehicles.

In addition, the soldiers abducted four Palestinians; three of them from in Azzoun town, east of Qalqilia, and one in Tal village, south of Nablus, in the northern part of the occupied West Bank.

Furthermore, the soldiers abducted four Palestinians; three of them in the West Bank governorate of Bethlehem, and one in Jenin, in the northern part of the occupied West Bank, after breaking into their homes, and violently searching them.

Also at dawn, the soldiers invaded several homes in different areas of Tulkarem governorate, in the northern part of the occupied West Bank, and abducted six Palestinians, after breaking into their homes and violently searching them.