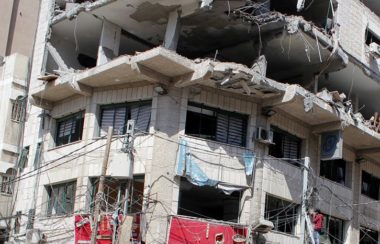 The Palestinian Ministry for Public Works and Housing has reported that the Israeli shells and missiles, carried out against the Gaza Strip in less than three days of escalation, have destroyed 130 residential units, and caused damage to 700.

In its Monday preliminary report, the Ministry said the soldiers destroyed and leveled 130 homes and residential structures, and caused damage to 700 others.

The army fired missiles and shells into hundreds of structures, including homes and residential buildings, in addition to roads, agricultural lands, naval structures and various public facilities.

During the military onslaught on Gaza, Israeli soldiers killed 27 Palestinians, including children, a baby and women, among them a baby and her mother who was also pregnant, and injured more than 160 Palestinians, after the army fired missiles at homes, residential towers and various other buildings and structures. Less than a handful of the slain Palestinians were resistance fighters.

Workers of the Public Works Ministry are still trying to remove the rubble and reopen roads, in coordination with the Civil Defense, various municipalities, the Red Crescent and the United Nations Relief And Words Agency (UNRWA).