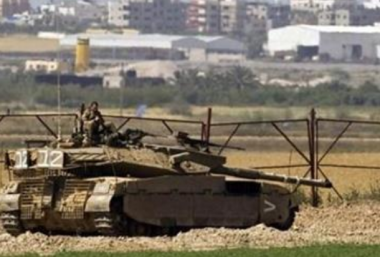 On Tuesday morning, Israeli soldiers, stationed across the border fence, fired dozens of live rounds at homes and farmlands, east of Khan Younis, in the southern part of the besieged Gaza Strip.

The soldiers, stationed on military towers surrounding Kissufim military base, east of Khan Younis, fired dozens of rounds into agricultural lands and homes, causing damage, and forcing the Palestinians out of their lands in fear of further escalation.

The violations and attacks against the Palestinian lands and homes was carried out amidst extensive deployment of tanks and armored vehicles near the border fence, while military drones flew overhead.

The soldiers also detonated explosives in several areas near the border fence; medial sources in Khan Younis said the explosions could be heard in all parts of the governorate.

On  Monday at dawn, Israeli navy ships opened fire at Palestinian fishing boats, close to the shore in Khan Younis, in the southern part of the besieged Gaza Strip, wounding two.