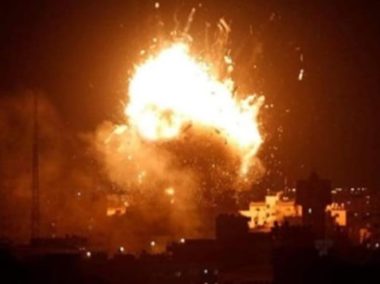 The Israeli Air Force fired several missiles into the Gaza Strip, on Wednesday at night, reportedly after shells were fired from the coastal region into Hof Ashkelon and Kibbutz Zikim, causing minor damage.

Media sources in the Gaza Strip said the Israeli army fired at least two missiles into a site, believed to be run by the al-Qassam Brigades the armed wing of Hamas in Beit Lahia, in northern Gaza, damaging it and causing fire.

They added that, just minutes after the first strike, the army fired missile into the same site, and destroyed it.

On Monday evening, the soldiers abducted two Palestinians, who reportedly breached the perimeter fence, in the southern part of the Gaza Strip, and claimed that the two carried knives and wire cutters.

Israeli sources said the Air Force fired many targets in northern Gaza after rockets sirens were sounded in Kibbutz Zikim and Hof Ashkelon Regional Council, close to the fence with Gaza.

They added that some of the sirens were later reported as false alarms, but said that, on Wednesday evening, a shell which was fired from Gaza, caused minor damage to a home in Hof Ashkelon.

On Monday at night, the Israeli army targeted fifteen sites in area in the northern and central parts of the Gaza Strip, and said that the targeted structures included “a weapons’ production structure,” in addition to “a compound for Hamas’s armed wing and a naval force center.”