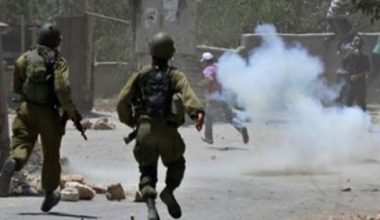 Israeli soldiers injured, Tuesday, many Palestinians at the northern entrance of al-Biereh city, in central West Bank, during a protest against the visit of U.S. Vice President to occupied Jerusalem.

One of the wounded Palestinians, a young man, only 19 years of age, was shot with a rubber-coated steel bullet in one of his eyes.

They were protesting the illegal U.S. recognition of occupied Jerusalem as the unified capital of Israel, and the Pence’s visit to meet Israeli Prime Minister Benjamin Netanyahu.

Furthermore, hundreds of Palestinians marched in Ramallah nearby city, carrying Palestinian flags, and chanting against the ongoing illegal Israeli occupation, and the U.S. stances which violate International Law.