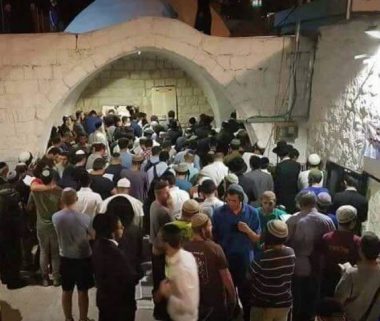 Israeli soldiers, and dozens of colonialist settlers, invaded on Wednesday at dawn, the northern West Bank city of Nablus, and headed towards Joseph Tomb area, and Tal Balata archeological site, east of the city, in addition to Tammoun town, before clashing with dozens of Palestinians, wounding three of them.

The invasion was carried out by dozens of army jeeps, and more than twenty buses, after the soldiers surrounded the two areas, and prevented the Palestinians from entering them.

Medical sources said the soldiers shot Qussai Ahmad al-Masri, from Nablus city, with a rubber-coated steel bullet in his face, before he was rushed to Rafidia governmental hospital.

The Palestinian was shot in Amman Street, after the soldiers invaded it and attacked many Palestinians who protested the incursion.

Furthermore, the soldiers invaded Tammoun town, east of Nablus, and shot Rafat Sa’id Bani Odah, 18, with a rubber-coated steel bullet in his leg, and Mohammad Hasan Bisharat, 18, with a similar round in the neck.

Both were returning home from their work, and were rushed to Tubas Turkish hospital, suffering moderate-but-stable wounds.

In addition, dozens of colonialist settlers invaded the northern area of Orif village, south of Nablus, and clashed with Palestinians, who hurled stones at them. Israeli sources said that one settler was mildly injured in his face.

In addition, the soldiers invaded Qotna town, northwest of occupied East Jerusalem, and abducted a mother and her child, from their home.

The soldiers also abducted four Palestinians, in Nablus, Qalqilia, and Bethlehem, in the West Bank.