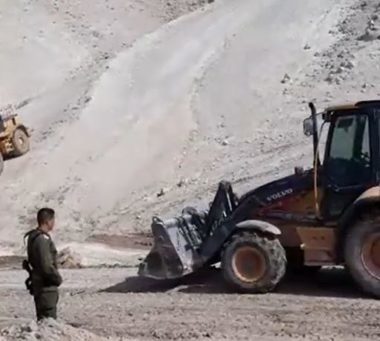 The Palestinians, along with dozens of Israeli and international peace activists, have been holding constant nonviolent protests, and solidarity activities with the Bedouin Palestinian villages of the al-Khan al-Ahmar, facing demolition and displacement.

Despite constant Israeli military assaults and violations against them, the peace activists continue to maintain a permanent presence in the community to prevent its demolition.

On September 5th, the Israeli supreme court denied an appeal against the demolition of the Palestinian community, and ordered its removal and displacement.

The first ruling by the court was made in May of this year, when it granted the military a green light for demolishing it.

There are approximately 200 Palestinians living in al-Khan al-Ahmar, %53 of them are children, and %95 of the population are refugees officially registered by the UNRWA. The community has one school providing education to 170 children.

It is worth mentioning that al-Khan al-Ahmar is surrounded by several illegal Israeli colonies, while Israel wants to remove it as part of its E1 colonialist project, which aims at surrounding occupied Jerusalem with a chain of Jewish-only colonies, and blocking the geographical contiguity of the occupied West Bank, and completely isolating the Palestinians from Jerusalem.