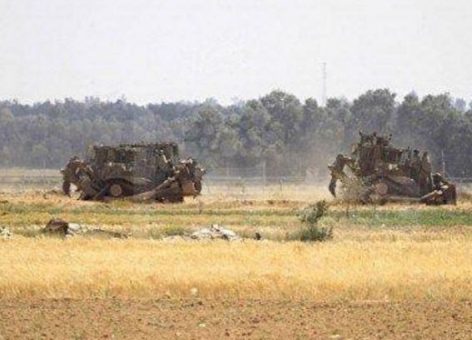 Eyewitnesses said four Israeli tanks, and three bulldozers, advanced more than 150 meters into the Palestinian lands, bulldozed some of them, and installed sand hills, close to the border fence.

They added that the Israeli vehicles came from the Kissufim military base, across the border fence, and fired many smoke bombs during the invasion.

The invasion is part of repeated Israeli violations targeting the Palestinians and their lands in border areas, in the northern and eastern parts of the coastal region.

The soldiers frequently prevent the farmers from working on their own lands, in addition to constant violations against Gaza fishers in Palestinian territorial waters.

On Monday at dawn, the army invaded ‘Aida refugee camp, north of Bethlehem, searched several homes and kidnapped two teenagers. The soldiers also assaulted and injured a Palestinian from Jenin.

In related news, the soldiers continued their strict siege and collective punishment on Sa’ir and Bani Neim towns, in the southern West Bank district of Hebron, for the eleventh consecutive day, and kidnapped six Palestinians.