Israeli Soldiers Invade Homes, Order Palestinian Out Of His Land, In Hebron 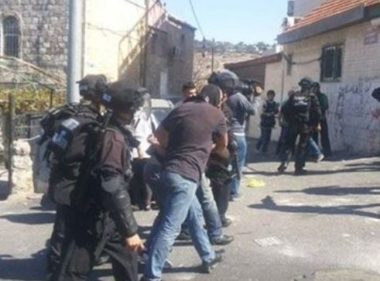 Israeli soldiers invaded, on Wednesday morning, several Palestinian homes and violently searched them after forcing the families out, in Masafer Yatta village, south of the southern West Bank city of Hebron, and ordered a Palestinian out of his orchard for “military considerations.”

Rateb Jabour, the coordinator of the National and Popular Committee against the Annexation Wall and Colonies in southern West Bank, said dozens of soldiers invaded Khallet ad-Dabe’ area, in Masafer Yatta, before storming many homes and violently searching them.

He stated that the soldiers forced the families, including the children, out of their homes in the cold for several hours, while searching their properties.

In addition, the soldiers handed Mohammad Ali Dababsa a military order to leave his olive orchard, without providing him with any further information, and installed a roadblock near the area, before stopping and searching dozens of cars, and interrogated many Palestinians while inspecting their ID cards.

The army only told the Palestinian that he is not allowed to enter his orchard for what the soldiers claimed “military considerations,” an excuse which largely precedes the illegal annexation of the lands.