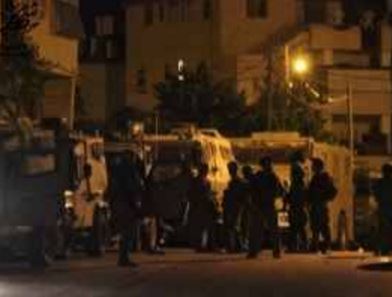 The Palestinian Prisoners Society (PPS) has reported that Israeli soldiers have kidnapped overnight and on Thursday morning, at least six Palestinians in the West Bank districts of Jerusalem, Jenin, Nablus and Bethlehem.

The PPS stated that the soldiers invaded homes in Jerusalem, searched them, and kidnapped two Palestinians, identified as Amjad Abu Sbeih, 34, and Odai Dabbagh, 17.

In Nablus, in the northern part of the West Bank, the soldiers kidnapped two Palestinians, identified as Abdul-Karim Amin Ghazi, 27, and Mohammad Hussein As’ad, 27, from their homes in Jama’in town, south of Nablus.

In addition, the Bethlehem office the PPS said the soldiers invaded homes in ‘Aida refugee camp, north of Bethlehem, and kidnapped a young man, identified as Yousef Nour Abu Srour.

In addition, the soldiers invaded a print shop in the al-Ram town, north of occupied East Jerusalem, violently searched it, and confiscated all of its equipment, and printed materials.

Furthermore, the soldiers shot and injured a young Palestinian man, during clashes that took place after dozens of soldiers and settlers invaded Nablus, while several army vehicles also invaded homes in Qaryout village, south of Nablus.

On Tuesday evening, the army lifted a gag order on information regarding the arrest of five Palestinians from Ni’lin village, west of Ramallah, who reportedly carried out a shooting attack targeting Israeli soldiers, last week.