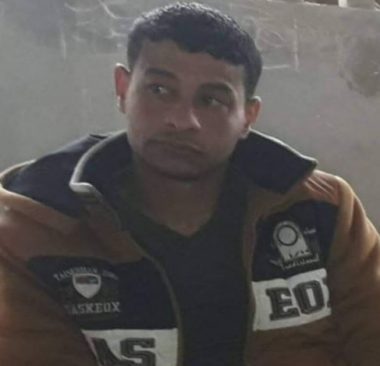 Palestinian medical sources have reported that Israeli soldiers killed, on Thursday evening, a young man east of Khuza’a town, east of Khan Younis, in the southern part of the Gaza Strip. He is the second to be killed on Thursday. The soldiers also targeted Palestinian ambulances, wounding one medic.

Dr. Ashraf al-Qedra, spokesperson of the Health Ministry in Gaza, said the soldiers shot Abdullah Mohammad Shahri, 28, with a live round in the chest, east of Khuza’a town, east of Khan Younis, in the southern part of the Gaza Strip.

At least one Palestinian was also injured by Israeli army fire in the area and was rushed to a local hospital.

The soldiers also fired many live rounds directly targeting a Palestinian ambulance, and medics trying to provide aid to a wounded Palestinian, and injured one medic, identified as Emad al-Buheisi. The wounded medic said he was providing treatment to an injured Palestinian inside the ambulance, when the soldiers fired may live round at it.

He was rushed to a hospital and was rushed to surgery after suffering serious bone fractures, and ruptured blood vessels, especially since the rounds fired by the soldiers at his ambulance were expanding bullets.

The medics were in an area 200 meters away from the border fence, when the soldiers targeted them and their ambulance with live fire.

Earlier Thursday, the army bombarded Gaza, killing one Palestinian, identified as Mohammad Hjeila, 31, and injured another.