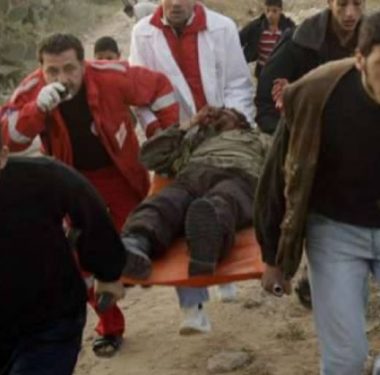 Israeli soldiers shot, on Saturday morning, a young man on Palestinian lands near the border fence, east of Khan Younis, in the southern part of the Gaza Strip.

The Health Ministry in Gaza said the soldiers, stationed behind sand hills, opened fire at the Palestinian, and shot him with a live round in his abdomen.

It added that the young man was rushed to a Palestinian hospital and is currently in a moderate-but-stable condition.

On Friday, the soldiers killed a Palestinian medic, identified as Razan Ashraf Najjar, 21, and injured at least 100 others, including 40 who were shot with live and exploding rounds.

Razan, who was wearing a clearly-marked medic vest, was killed when an Israeli sniper shot her in the back, and the bullet went through her heart.

She was at least 100 meters away from the eastern border fence when she was shot while providing aid to wounded Palestinians and attempting to evacuate them to the field clinic.

Prior to her injury, Razan managed to render aid to many wounded Palestinians, including an elderly man who suffered the effects of teargas inhalation.