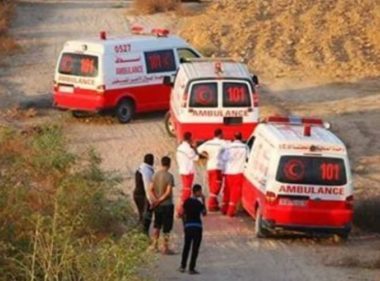 Sources at the Al-Aqsa Hospital in Deir al-Balah, said the soldiers shot two young men with live fire, during a protest on Palestinian lands near the perimeter fence, east of the city.

They added that the two Palestinians suffered moderate wounds, and are currently receiving the needed medical attention.

The soldiers also fired dozens of gas bombs and concussion grenades at many protesters, causing several Palestinians to suffer the effects of teargas inhalation.

On Monday, Israeli navy and soldiers shot 32 Palestinians with live fire, in addition to causing dozens to suffer the effects of teargas inhalation, during protest against the ongoing siege on Gaza.