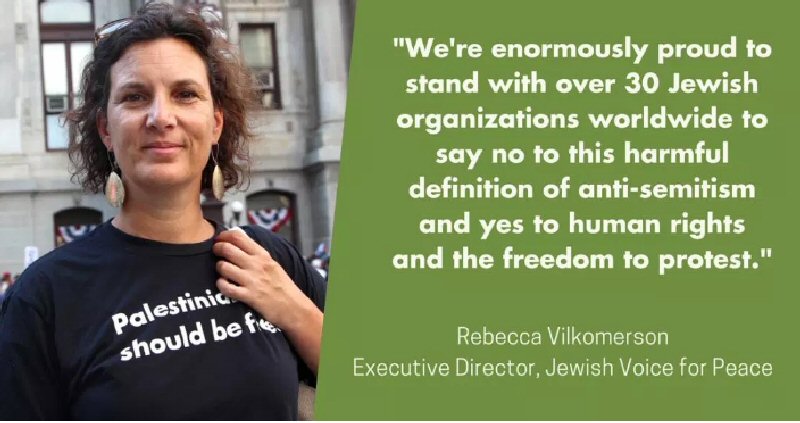 From South Africa to Sweden, New Zealand to Germany to Brazil, for the first time ever, over thirty Jewish organizations across the globe came together in a statement condemning attempts to stifle criticism of Israel.

The statement warns of a growing trend of legislative campaigns to target organizations that support Palestinian rights, particularly the nonviolent Boycott, Divestment and Sanctions (BDS) movement.

“From our own histories we are all too aware of the dangers of increasingly fascistic and openly racist governments and political parties,” the global letter states. “The rise in antisemitic discourse and attacks worldwide is part of that broader trend. At times like this, it is more important than ever to distinguish between the hostility to or prejudice against Jews on the one hand and legitimate critiques of Israeli policies and system of injustice on the other.”

The United States has witnessed increasing legislative efforts to criminalize the boycott of illegal Israeli settlements and repress advocacy for Palestinian human rights by defining such acts as antisemitic, with two bills currently under discussion in US Congress. Such efforts are mirrored at the state level, where more than 25 state legislatures have considered or enacted various forms of targeting advocacy for Palestinian rights.

Of particular concern is the usage of the International Holocaust Remembrance Alliance (IHRA) definition of antisemitism, intentionally worded such that it equates legitimate criticisms of Israel and advocacy for Palestinian rights with antisemitism, as a means to suppress the former.

A similar approach is being employed across Europe. In France and Germany, the bank accounts of BDS groups were closed and campaigns promoting the boycott of goods from illegal Israeli settlements were convicted of incitement to hatred. The UK has witnessed an ongoing battle about the legality of local government boycotts against Israeli settlements.

The state of Israel has waged its own campaign against advocates of BDS. In January, the Israeli Ministry of Strategic Affairs announced a ban prohibiting the leaders of 20 organizations worldwide from entering Israel, including Jewish Voice for Peace, for supporting BDS. And in 2015, the Israeli High Court upheld a law which allows individuals to sue individuals calling for a boycott of Israel or of companies profiting from illegal Israeli settlements.

“IT IS VITAL THAT JEWISH ORGANIZATIONS ACROSS THE GLOBE STAND UNITED AGAINST HARMFUL DEFINITIONS OF ANTISEMITISM AND TOGETHER FOR HUMAN RIGHTS AND THE FREEDOM TO PROTEST. WE AT JVP ARE PROUD TO HAVE INITIATED THIS HISTORIC EFFORT,”

Ms. Vilkomerson is available to speak with the media. Watch the recent video series with Rebecca, on The Real News Network:

Boycott from Within (Israeli citizens for BDS)

Coalition of Women for Peace (Israel)

European Jews for a Just Peace

Gate48 – critical Israelis in the Netherlands

Italian Network of Jews Against the Occupation

Jewish Voice for Democracy and Justice in Israel/Palestine (Switzerland)

Jews against the Occupation (Australia)

Jews for Justice for Palestinians (UK)

Jewish Voice for Peace is a national, grassroots organization inspired by Jewish tradition to work for a just and lasting peace according to principles of human rights, equality, and international law for all the people of Israel and Palestine. JVP has over 200,000 online supporters, over 70 chapters, a youth wing, a Rabbinic Council, an Artist Council, an Academic Advisory Council, and an Advisory Board made up of leading U.S. intellectuals and artists.