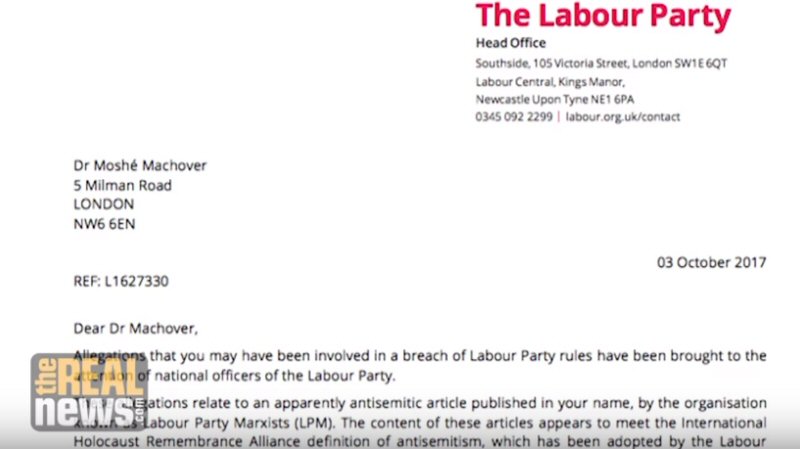 Moche Machover, an Israeli-born mathematician, philosopher and radical activist, received an expulsion letter from the Labour Party for his article, ‘Anti-Zionism Does Not Equal Anti-Semitism’.

SHIR HEVER: Welcome to The Real News Network. I’m Shir Hever in Heidelberg, Germany. After Jeremy Corbyn became the leader of the Labour Party in Britain in 2015, the party began a crusade to purge itself of members suspected of anti-Semitism. It quickly became apparent, however, that the real goal of this purge was not to clean the party of anti-Semitic elements, but rather to expel all members who expressed critical views against the Israeli occupation of Palestine.In January this year, Al Jazeera published an in-depth investigation of the involvement of the Israeli Ministry of Foreign Affairs in the internal politics of British parties, and interviewed Jackie Walker, the vice-chair of one of Labour’s organizations.

JACKIE WALKER: Some of us would say it was mostly a constructed crisis for political ends. I would say there is a crisis of the way that anti-Semitism is being manipulated, and being used by certain parts of not just the Labour Party but other parties and the media, to discredit Jeremy Corbyn and a number of his supporters. I mean let’s disagree politically. I’m anti-Zionist. They are pro-Zionist. Let’s have that argument. Let’s have that argument, not this one that’s going on at the moment now.

SHIR HEVER: Even the Al Jazeera report was under attack with pro-Israeli groups lobbing accusations of anti-Semitism, although it was announced this week that the British Ofcom agency cleared Al Jazeera of the accusations. In this context, that it was published last week, that Moshe Machover received a letter expelling him from the Labour Party. Moshe Machover is a mathematician, philosopher and radical socialist activist, noted for his writing against Zionism. Born to a Jewish family in Tel Aviv, then part of the British mandate of Palestine, he moved to Britain in 1968. Machover was the founder of Matzpen, the Israeli socialist organization in 1962. He was among the first Israelis who spoke openly against occupation of 1967. In British, he has become a prominent activist against war and apartheid, not just in the Israeli-Palestinian context. He is an author of numerous articles and numerous books. Thank you very much for joining us Moshe.

MOSHE MACHOVER: It’s a pleasure to speak to you.

SHIR HEVER: You wrote an article with the title, “Anti-Zionism does not equate anti-Semitism,” which was mentioned in your expulsion letter from the Labour Party. Why did you write this letter and who raised these allegations against you?

MOSHE MACHOVER: Well, there is some confusion about this article. This article is actually report about the talk which I gave months ago, and it was originally published in weekly called “Weekly Worker.” The latest hoo-ha concerns actually a reprint of the article that was disseminated by a group of people called Labour Party Marxists that are allegedly or in fact, I don’t know, somehow connected with the little group that publishes the Weekly Worker.I was contacted by someone from this Labour Party Marxists with whom I have no, you know, direct connection. They asked me for permission to reprint my article and I willingly gave it. I would do the same for anyone who wants to reprint my articles. I am very keen for my views to be disseminated.

SHIR HEVER: Do you know, the letter of your expulsion talks about the Labour Party Marxists, and claims that they are a front for the Communist Party of Great Britain. Actually, in an interesting twist in this article, in the beginning, the letter expelling you is talking about anti-Semitic accusations, but then said that the real reason for expelling you is because you are associated with Labour Party Marxists. In fact, you’re not being accused directly of anti-Semitism. You’re instead accused of being a traitor to the party somehow, a double agent because you have double loyalty because of this group that reprinted your article. Did you have a chance to defend yourself against these accusations?

MOSHE MACHOVER: Oh no. No it was, it was like summary execution. No, no chance to answer any accusation, but there is an interesting twist to this tale. Yes, first of all, they are accusations against me of anti-Semitism, or allegations, allegations really. I think they don’t say who those allegators are who are lurking in some smoke. No. It’s just, it just insinuation. This is just mood music.Eventual, the cause for my expulsion is my alleged connection with Labour Party Marxists. The irony is that I read in last week’s, the actual current issue of Weekly Worker, a letter by a comrade called [Strom Kebron 00:05:41], he apparently is one of the Labour Party Marxists. He got a letter expelling him and he’s seen as publishing my article. You see the circularity.

SHIR HEVER: People who are reprinting your article are being expelled as well, not just you as the author.

SHIR HEVER: Right. Okay, so it’s guilt by association for both of you.

MOSHE MACHOVER: No, it’s worse than this. It is a vicious logical circle. If you think about it, I am expelled for being associated with them and they are expelled for actually publishing or republishing in fact an article by me.

MOSHE MACHOVER: Oh I think you’ve got it all wrong. It is not something, an action by the Labour Party. It is all part of a struggle within the Labour. The Labour Party is in fact not trying to commit suicide. It is trying to resuscitate itself and it is resuscitating itself by moving to the left. It has become a mass party by a flow of masses of activists being, many of them young but also some old ones who previously were disappointed or despaired of politics. They are mostly on the left. This is how, Corbyn became leader.You have a party whose grassroots are massively on the left. But and also its top leadership, you know Jeremy Corbyn and his close associates are on the left, but the party bureaucracy and the party in Parliament is still left over from the Blair-ite right-wingers and careerists. They’re trying to defend their positions and to fight back. One of their dirty bombs is the accusation of anti-Semitism.

SHIR HEVER: Actually this kind of old-guard more conservative branch of the Labour Party, they are exploiting the Israeli lobby to try to remove the progressives?

MOSHE MACHOVER: Yes. Yes. I don’t know if you watched … If you have a video of Corbyn’s address to the recent national conference of the Labour Party, it was last week or a few days ago. The bit of it that got the most enthusiastic standing ovation was his support for the rights of the Palestinian people.

SHIR HEVER: Yes, and we are covering actually Corbyn’s speech, here on The Real News, in a separate interview. I want to ask you one last question. This is all a very recent development. You received this letter just last week, but I can see that you’re still, you have an optimism about the future of the Labour Party when you talk about a wide base of progressive supporters, more to the left. Can you tell us a little bit about the kind of support that you’ve been receiving from organizations that heard about your expulsion and how they’re responding? Is this giving you some kind of support?

MOSHE MACHOVER: Oh this has been most encouraging and gratifying. It keeps my hopes up for the Labour Party. Of course, the fight is still on, but and the right wingers will not give up so easily. They are … But I think you know it’s sort of a last trench or last ditch fight on their behalf. I’ve received massive support, both from my local Labour Party, or what used to be my local Labour Party before I was arbitrarily and summarily expelled, but also from other branches of the Labour Party far and wide. The resolutions supporting me and demanding my reinstatement, immediate reinstatement, are receiving almost or totally unanimous support or almost unanimous support.I mean in my local branch for example, my local area branch of the Labour Party, a resolution supporting me and demanding reinstatement was adopted nemcon with two abstentions. This is not very exceptional. [inaudible 00:11:46] which tells you that this is not the Labour Party against me. It’s the right within, fighting last ditch battle against the massive grass root left, which is now … I mean the Labour Party now is the largest party in the whole of Western Europe. It is, it is, it has a new inflow of members of hundreds of thousands of people. It is a massive huge party and mostly on the left.

SHIR HEVER: Well, I’m certainly hoping that you will quickly be reinstated. I also hope that you will agree to join us again on The Real News for additional interviews. Thank you very much for joining us.

MOSHE MACHOVER: I’ll be delighted to talk to you again.

SHIR HEVER: And thank you for joining us on The Real News Network.