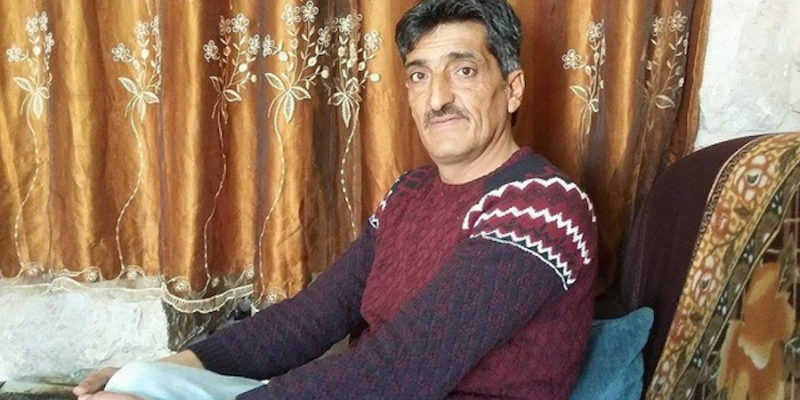 The violence of soldiers and settlers has not deterred the Shamsiya family from reporting on human rights violations in Israeli occupied Hebron.

Imad Abu Shamsiya is a 47-year old husband and the father of five children – three boys and two girls. A shoemaker by profession, for years he has been dedicating a large part of his time to opposing Israeli occupation by documenting human rights violations committed by Israeli settlers and soldiers in his home as well as in Tel Rumeida and other parts of Hebron via camera. Trying to reveal to the world the racist and violent Israeli system has not only contributed to the conviction of some Israeli perpetrators, but has turned the life of Imad and his family into a living hell.

In 2007, the Shamsiya family moved into a house that had been in family hands for decades, located in Tel Rumeida, in the H2 area of Hebron, which is under Israeli military control and a hotspot of tension and escalations by Israeli settlers and soldiers. Tel Rumeida is home to 172 Palestinian families and one settlement inhabited by some of the most violent Israeli settlers in Palestine.

“From the very beginning of my family’s life here, we started to suffer,” Imad said. Only four months after settling into their new home, Imad’s daughter was attacked by a group of Israeli settlers who threw stones at her and thereby broke her jaw.

Two months after the attack, Imad started documenting violations by Israeli settlers on camera and sent the material to Palestinian human rights organizations. The camera is a blessing and a curse, because it serves as a form of protection, but can also lead to reprisal attacks by settlers. Nevertheless, filmed incidents are typically the only form of proof that leads to conviction of Israeli perpetrators. Without video documentation, Israeli crimes go fully unpunished in an environment of dehumanization and hatred.

“My wife, Faiza, and I started to document every single attack on our family as we gradually also documented incidents in the neighborhood. Since then, the Israeli settlers and soldiers [have sought] revenge by harassing all of us”, Imad said angrily. Israeli forces have arrested Imad’s oldest son, Aune (18), six times since the age of 14. After Aune was shot in the leg, which required medical treatment for a full year, Imad sent his child to live in Jerusalem with his uncle to be safe. Israeli forces however also arrested Imad’s two other sons, Mohammed and Saleh, at the ages of 13 and 9 respectively following complaints about the boys by settlers. The entire Shamsiya family has been a victim of such attacks, ranging from arbitrary arrests of minors to acid thrown at Imad’s daughter, Marua. Israeli perpetrators enjoy full immunity, while Palestinians are assumed to be guilty unless proven otherwise.

The life of the Shamsiya family was made even harder when the Israeli military issued an order on 29 October 2015, establishing Tel Rumeida as a “closed military zone.” Israeli soldiers invaded the Palestinian resident’s homes at night to register every Palestinian inhabitant and issue them a number. Today, only registered residents are allowed to enter the Tel Rumeida area, which is controlled by an electronic checkpoint and fence. Israelis can leave and enter as they please and without undergoing a security check. The settlers also are able to carry arms and other weapons into the area and frequently use them to harm Palestinian residents. Almost 100 Palestinian families have fled the area of Tel Rumeida due to concerns of basic safety.

“The amount of attacks by Israeli settlers and soldiers against my family are too many to count,” Imad adds. One of the worst offenses he experienced was when settlers tried to poison his entire family. “One night we had guests at our house and as I walked them to the checkpoint around 9 pm, I noticed a settler on the roof of my house. I immediately checked the roof and found that the water tanks were open and that the water had a strange color,” Imad describes. When he called the police, they found that the water had been poisoned and Imad had to empty the tanks and exchange them. Even though Israeli soldiers could see the perpetrator from one of the many watchtowers established in and around Tel Rumeida, the crime went unpunished and was registered as an offense by an “unknown.” “With these attacks the Israelis want to deliver a clear message: my family will be attacked as long as we live here and document the crimes,” Imad expalined.

The dangerous situation escalated further following shooting incident in cold blood of Abdel Fattah al-Sharif by the Israeli soldier Elor Azaria in March 2016. Imad captured the camera on video and distributed to human rights organizations and the media. The video clearly showed how an Israeli soldier purposely shot a motionless al-Sharif lying on the ground in the head. The attack sparked international media attention and condemnation and led to the very rare conviction of an Israeli soldier, even though the verdict was a highly lenient 18-month sentence. The Israeli public widely defended Azaria and protested against the verdict. Israeli societies defense of Azaria is reflective of an atmosphere that dehumanizes Palestinians and encourages of violence by Israeli officials, such as frequent extrajudicial street executions of Palestinians.

“Since the video became public, my life started to change and I received personal death threats on the phone and through Facebook. Once, I received a phone call by an unknown number in the middle of the night, speaking in broken Arabic and telling me that I will be sorry for what I have done and that me and my family will be burned down,” Imad said of the aftermath of the distribution of the video of al-Sharif’s execution. Settlers started gathering in front of Imad’s house to swear at him, demand his family leaves the area and attempt to enter his home. The regular throwing of stones and other devices led Imad to build a fence around the entire house in addition to the fence that already exists from the Israeli occupation.

“Me and my family are scared to leave the house, we are locked in here and perfer go in and out illegally through the fence of the military zone than using the road in front of the house that leads to the checkpoint.”

Imad, who has a handicap from birth leading to walking difficulties, is forced to climb through waste and over obstacles alongside the fence when he wants to leave his house to avoid being harassed by settlers on the actual road. Moreover, he has lost his job as he is unable to meet with customers. “I live here and suffer because of my camera,” Imad reiterates as he explains how Israelis have offered him money to stop filming and 15 million USD to move away from Tel Rumeida. “We will not leave our home, we will not give our house away so more settlers can move into the area, and we will continue to oppose the apartheid system and racist policies imposed on us by the occupying power,” Imad concluded.

Between October 2015 and March 2017, 15 Palestinians, including minors, were killed in the area, several families were ripped apart, Palestinian’s access to education and health was restricted and an increasing number of attacks by settlers go unpunished. Tel Rumeida is exemplarily for the Israeli apartheid system and collective punishment of Palestinians, which is illegal under international law as defined in Article 33 of the Fourth Geneva Convention. Palestinian Center for Human Rights relentlessly works to document these crimes in order for the Israeli perpetrators to be held accountable.

This article is an edited version of a narrative published as part of the Palestinian Centre for Human Rights‘ “Life Under Siege” series.

At AIC official: The Achievements of the Hunger Strike for Freedom and Dignity